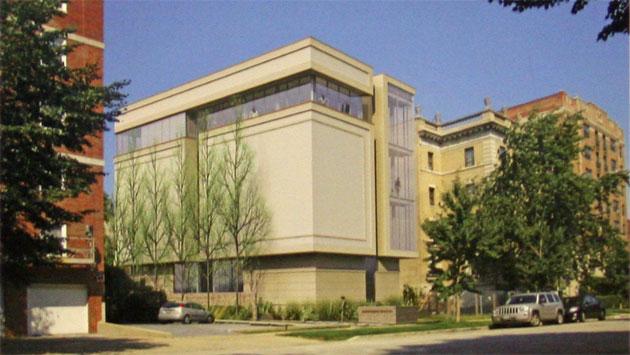 The Evanston Preservation Commission Tuesday night approved plans for a new museum building on the site of a Victorian mansion destroyed by fire while it was undergoing renovations.

The proposed Evanston Museum of Time and Glass is owned by Cameel Halim, a real estate investor who owns the Carlson Building and other properties in Evanston.

Halim won approval from the City Council in 2007 to convert the former Catholic Women's Club building at 1560 Oak Ave. for use as a museum to display his extensive collection of antique time pieces and stained glass. 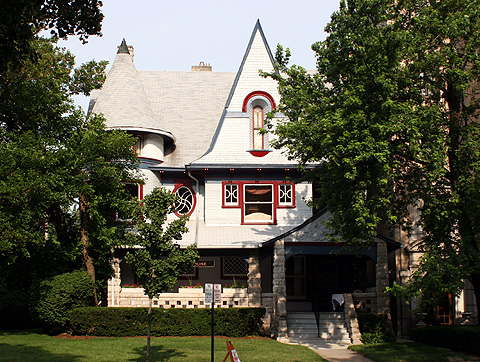 Top: A rendering of the planned new museum in context with neighboring buildings on either side. Above: The Catholic Women's Club in 2007.

In 2008 the city approved plans to build an addition at the rear of the building to increase the capacity of the planned museum.

After some delays, and a grant of extra time to complete the project, construction of the addition and rehabilitaton of the mansion began late last year — but then the building was destroyed in a spectacular fire last March and ordered demolished by the fire chief as a safety hazard.

The morning after the fire.

The Preservation Commission Tuesday voted 7-2 to approve a certificate of appropriateness for the new building, a step required because the property is located within the city's Ridge Historic District. The Women's Club building was also listed as a local landmark.

Commissioners said the design presented Tuesday by architect Adam Wilmot of Wallin-Gomez Architects of Chicago, was a substantial improvement from an earlier version shown the commission last month.

The project also won support from Michael Pure, who owns the Margarita Inn just north of the museum site. 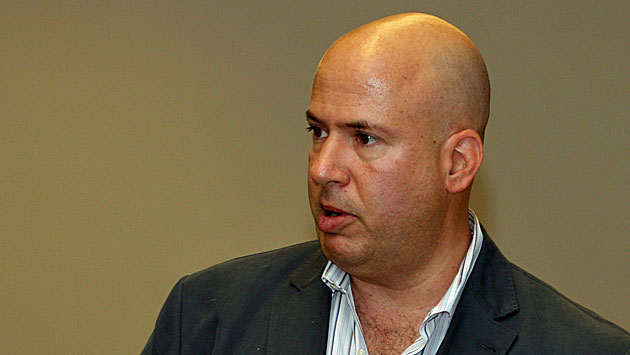 Pure said the museum would be a huge benefit for the city and he praised Halim for taking the time and effort to build the museum.

The building, as described by Wilmot, will have 14 to 15 foot ceiling heights to display the large pieces in Halim's collection.

The rear portion of the structure will be built on the foundation that had been laid for the addition before the fire, and the front portion would meet all the setback requirements specified in the zoning code, Wilmot said.

The structure will use a mixture of stucco, limestone, glass and polycarbonate glazing, along with Bedford stone salvaged from the original building.

In an interview this morning, Preservation Coordinator Carlos Ruiz said that the only remaining step before construction can begin is for the developer to submit construction plans to the city for building permit approval.