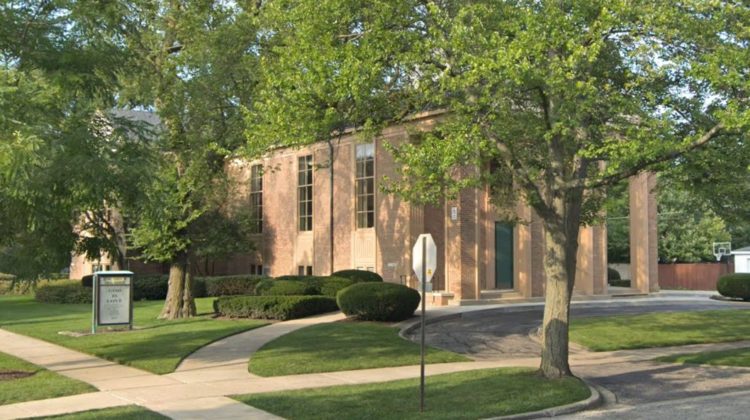 Despite strong opposition by the congregation that owns the building, the Evanston Preservation Commission is expected to recommend historic landmark status for the Second Church of Christ, Scientist in Northwest Evanston.

City Planner Cade Sterling is asking the commission for a “yes” vote during the panel’s meeting on Tuesday evening.

The preservation panel already gave first round approval in May, but then delayed the required second vote last month when Church leadership questioned whether the 1946-vintage structure was actually designed by famed local architect Lawrence Perkins.

Perkins, who died in 1990, was an internationally recognized architect best known for revolutionizing the design of schools. Several of his structures are already Evanston landmarks.

Perkins’ role, or non-role in design of the Christian Science Church at 2715 Hurd Ave. is critical to the landmarking debate, as one of the criteria for designation is the significance of a building’s designer.

Church leaders say they have documents from 1937 showing that an architectural firm headed by Perkins’ father Dwight was hired for the project, and that Lawrence Perkins was only mentioned as one of several “younger members” at the company.

Thus, the Church says there is no proof that Lawrence Perkins was ever the major architect for the project.

The Church also says that its membership has declined from 400 when the building opened, to only 40 now, and the congregation cannot afford to maintain the building if it is declared a landmark.

Landmark status makes it more difficult to modify or tear down a property without City approval.

In a letter to the Commission, Church attorney Bernard Citron says landmarking the Church will only lead to a demolition request in the future.

“The only difference between now and then,” Citron says, “will be the intervening years where the building deteriorates and becomes a detriment to the neighborhood.”

Objections from that neighborhood blocked the Church three times from selling the property. Two would have kept the building for use as a church or social service center, another would have seen the structure town down and replaced with a preschool.

Church leaders point out that the historic preservation nomination came from a nearby resident who had previously opposed new uses for the site.

That neighbor, Andrew Nebel, has said he proposed landmark status to recognize Perkins’ significant contribution both to Evanston and to the world of architecture.

City Planner Sterling says enough evidence does exist to place Lawrence Perkins at the head of the design team for the Christian Science Church.

In the agenda packet given to the Commission, Sterling includes a letter from the firm of Perkins and Will, successor business to the original company where Lawrence Perkins worked.

That letter states, in part, that “although it is common for any architectural firm to have multiple hands touch a project from inception through construction, Lawrence Perkins would have been the Partner-In-Charge for the project and in that role he would have had final say on all aspects of the design.”

Preservation Commission records show the panel almost always recommends landmark status. However, in most of those cases, unlike this one, the property owner supports landmark designation.

If the Commission does recommend landmarking, the issue then goes to City Council, which has final say.

While the preservation panel may not, under its rules, consider financial impact when voting on landmark status, City Council has no such restriction.

So when this debate goes on to the Council, many of the same issues will be brought up.

And as for what the Church might do if City Council accepts the landmark recommendation, Church Board President Ann Ratajczyk has told Evanston Now “we’re looking at our options.”