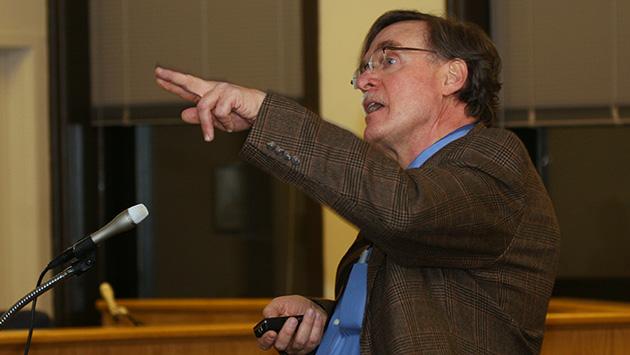 Northwestern University officials gave members of Evanston's Preservation Commission Thursday evening an overview of the school's plans for its campus ahead of commission review next week of designs for a new north campus parking garage.

Paul Weller, the university's director of facilities planning, presented a history of plans for the Evanston campus, including one developed a century ago by noted architect Daniel Burnham that was never realized — at least in part, Weller said, because it called for demolishing virtually every then-existing building on the campus. 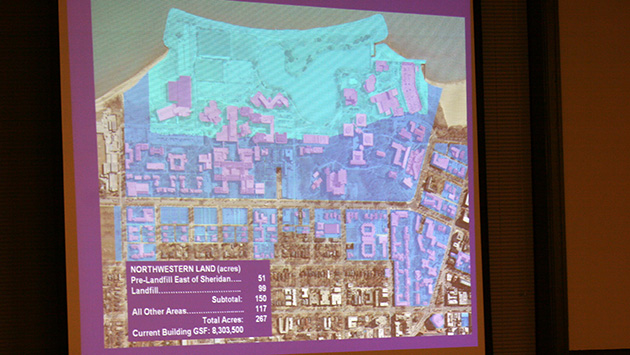 Top: Paul Weller. Above: A slide from his presentation.

The Preservation Commission, citing in part their devotion to the Burnham-designed Fisk Hall, voted unanimously last October to reject the university's plan for a new visitors center and parking garage at the south end of campus.

That decision was overturned a few days later by the City Council on a 7-2 vote and the council approved plans for the visitors center.

Weller also provided details of the university's current campus framework plan, released in 2009, and responded to commissioners' questions about how much they could rely on the plan being carried out by noting that all campus construction projects are dependent both on success in fundraising and the differing space needs of different programs. 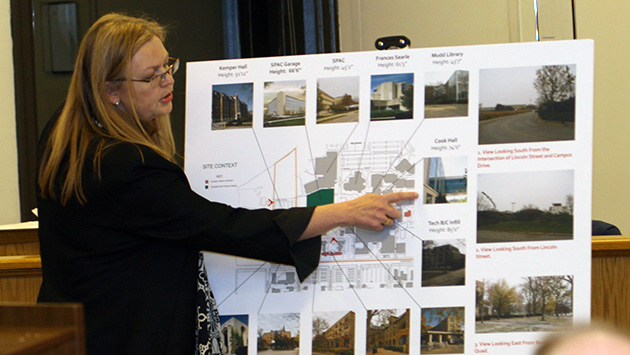 Top: Paul Weller. Above: Bonnie Humphrey, the university's director of design and construction, with a chart showing photos and heights of buildings near the proposed parking garage.

He said the university is generally trying to locate its tallest buildings toward the east side of campus, away from residential neighborhoods that border the campus to the west, although he noted that the framework plan does also include the concept of tall buildings along Clark Street west of Chicago Avenue for a south-campus recreation complex at the edge of Evanston's downtown. 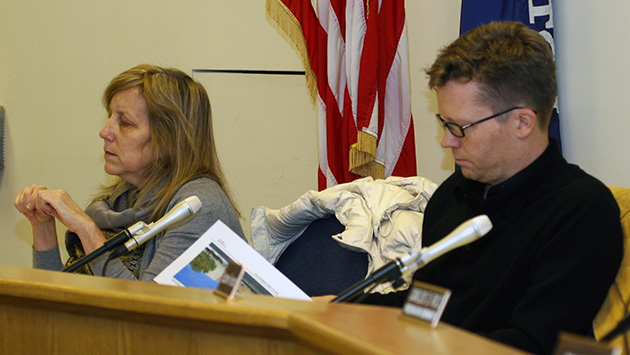 The new north campus garage and fitness center will provide six levels of parking totaling 1,125 spaces, replacing about 400 spaces in the current surface lot at that location and about 450 spaces that will be eliminated when construction of a new building for the Kellogg School of Management begins later this year.

Weller said that the university is working to incorporate parking into other campus building projects — in part because for donors, the idea of funding just a parking garage isn't very appealing. "Nobody wants to have their name on a parking structure," Weller said.

The new garage and fitness center building is part of a larger north campus recreation and athletic complex for which University President Morton Schapiro announced last month that the school had raised $55 million just three months after the campaign was announced. 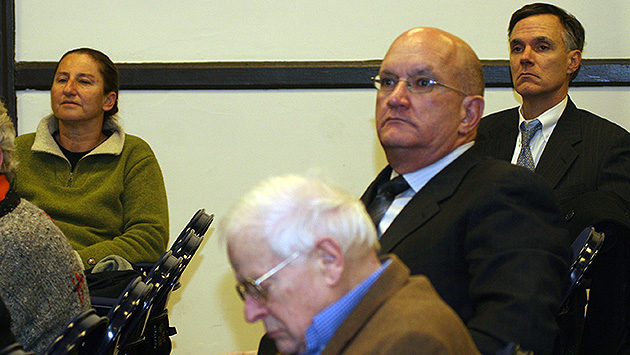 Some of the roughly two dozen residents who turned out for the workshop session.

The Preservation Commission meeting to vote on the north campus garage project is scheduled for 7 p.m. on Tuesday, Jan. 15.