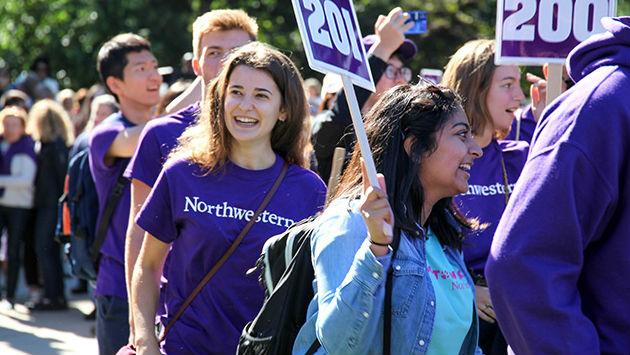 More than 2,000 new Wildcats from Northwestern University’s Class of 2022 and transfer students filled the newly constructed Ryan Fieldhouse Sunday for the President’s Convocation, and a series of speakers urged them to have fun and make the most of their Northwestern experience.

With a week of Wildcat Welcome activities in full swing, President Morton Schapiro urged students to look beyond the classroom, advising them to mix in fun and discovery along with their studies. He said that at graduation, he wanted the students to be able to reflect on their four years as time well spent not only learning in the classroom but also about themselves.

“When I look at you and I hand you, God willing, your diplomas, and I say, ‘Did you have fun here or did you just suffer as in high school to prepare and to pad your resume?’,” the President said, “I want you to look me in the eye and say, ‘You know, I was prepared, but I made friends for life, I expanded my intellectual horizons and I had one damn good time.’ Go ‘Cats.”

In addition, the President and other speakers urged the new students to listen to one another, listen to others’ ideas and, perhaps most importantly, create support systems to celebrate the good times and help one another through the tough ones.

“Don’t be hard on yourself. Everybody’s a little scared; everybody struggles,” President Schapiro said in his convocation. “But this is a community. If it really is a family, and it’s just not a word that we throw around, and we really care about loving each other, we have to be there to support each other.”

President Schapiro asked the students to take care of themselves and to pay attention to both their physical and mental wellbeing. It was a message that was repeated throughout the day.

Vice President of Student Affairs Patricia Telles-Irvin challenged students to listen – to themselves, to differing viewpoints and to one another, especially if someone is struggling.

“If you decide you’re going to change your major, listen to that,” Telles-Irvin said. “If you decide that you actually are starting to have feelings for someone of the same sex, listen to that. If you hear some struggle in the voice of one of your friends, classmates, roommates, pay attention and get them some help and some support. One of the key components of resilience is having a strong support system. The key part of being a part of a support system is to be able to listen.”

Students in the Class of 2022 call 54 countries and 47 states, the District of Columbia and Puerto Rico home, Dean of Undergraduate Admissions Chris Watson said. To illustrate the wide reach of the incoming class, Watson said there are students from Dublin, Ohio and Dublin, Ireland; Venice, California and Venice, Italy; Lake Geneva, Wisconsin and Lake Geneva, Switzerland.

Watson gave a special welcome to students from North and South Carolina, who have been through “a tough 10 days” in the wake of Hurricane Florence. Some fled the hurricane’s path and moved to campus early. He also congratulated four students from France for their team’s World Cup win this summer.

In case anyone was wondering what the most popular name in the class is, Watson said it is Alex – or some derivation of the name: 37 students have names that range from Alejandra to Alec, Watson said. One member of the incoming class is from Rose-Hill, Mauritius, a whopping 9,905 flight miles from Evanston. Another student calls Melbourne, Australia, home, meaning he traveled 9,807 miles to get to Northwestern.

With the diversity represented in the incoming class, Telles-Irvin said it is more important than ever to listen to and respect the different perspective each student will bring to the University.

“The strongest way that we can communicate with others is to listen — not necessarily to have a quick response but to truly understand each other,” Telles-Irvin said. “Unfortunately, right now our country is very divisive and ‘if you don’t agree with me, I’m just going to walk away.’ And I’m going to challenge you to not walk away. I’m going to challenge you to stand there and listen to a different perspective. That is what a civilized society is all about, and that is what democracy is about.”

Provost Jonathan Holloway echoed this sentiment in his address, saying that students must look for what is “only revealed when a new perspective is revealed. Dare to listen to beliefs that are not your own.”

He opened with a line from “Enlightenment,” a poem by faculty member and former United States Poet Laureate Natasha Tretheway: “I see how the past holds us captive, its beautiful ruin etched on the mind’s eye.” Referencing Thomas Jefferson’s “Notes on the State of Virginia,” Holloway explained that even though some students may never take a history class, while others may never take a literature or science class, he is certain that having exposure to these areas simply by being at Northwestern will make them better.

“You will find yourself on a path where you will stumble upon messy intersections where fields like history, science and literature have met,” Holloway said. “There will be many other moments of intersectional collision while you are here. When you find yourself at a crossroads, take the time to inspect the seemingly empty spaces between fields.”

Vice President of Associated Student Government Emily Ash addressed the new class with advice she wished she had heard when she was a first-year student. She said that even though the new students were the best and brightest in their high schools, they will experience rejection in college. Ash said to overcome tough times, they’ll need to work hard to build their own support systems.

“If you look around your (peer-advising) group or your residential floor and don’t quite yet see your future apartment mates or lifelong friends, don’t panic,” Ash said. “You will find your people. Know that these incredibly resilient and wonderful humans sitting around you today will also be what saves you, what gets you through your toughest days.

“I think that is also what I would tell first-year Emily. When she was worried about not having the perfect community by the end of fall quarter, I would have shared this quote with her: ‘Find good people, and if you don’t, find good music to hold you until they come.’ So my advice is to find good people and find good music. Your playlists and your relationships probably won’t look like anyone else’s.”

Watson impressed upon the new class the importance of taking advantage of the arts and culture offered on campus and in nearby Chicago.

“Take your roommate or your hallmates to the Art Institute, to the Field Museum. Take the El and sample amazing food in Pilsen or along Devon Avenue,” Watson said. “Watch some live music at Aragon or The Metro. See a show at the Goodman or Neofuturists, and when you’re 21, go see jazz at the Green Mill or Kingston Mines.”

He said by the time they graduate, he wants them to be able to answer four essential questions about Chicago: 1) Cubs or White Sox? 2) Jazz or blues? 3) Giordano’s or Lou Malnati’s? 4) Riot Fest or Lollapalooza?