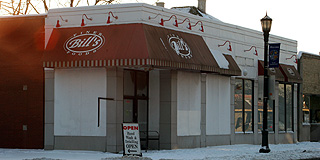 The building that once housed Bill’s Finer Foods at 1800 Dempster St. has a new owner.

William Holloway says he plans to move his Sir Speedy Printing Center to the building from its current location at 1007 Davis St.

Holloway told the city’s Site Plan and Appearance Review Committee this afternoon that he plans to replace the boarded up windows in the storefront with glass, renovate the entranceway and install new lighting and signage.

"We want to make the building, and thus the neighborhood, more attractive," Holloway said.

Alderman Lionel Jean-Baptiste, who’s 2nd Ward includes the building, said, "It’s a signifcant structuure in the neighborhood which provided service for a long period" before closing about two years ago in the face of ongoing competition from the Dominick’s supermarket just a block away in the Dempster-Dodge shopping center.

The committee voted unanimously to give preliminary and final approval to the renovation plans.

Holloway is also seeking assistance from the city’s facade improvement program to help fund the renovations.

Sir Speedy will be the second printer to make a move from downtown to the Dempster-Dodge area recently. Earlier this year Allegra Print & Imaging moved to 1255 Hartrey Ave. from 1580 Maple Ave.