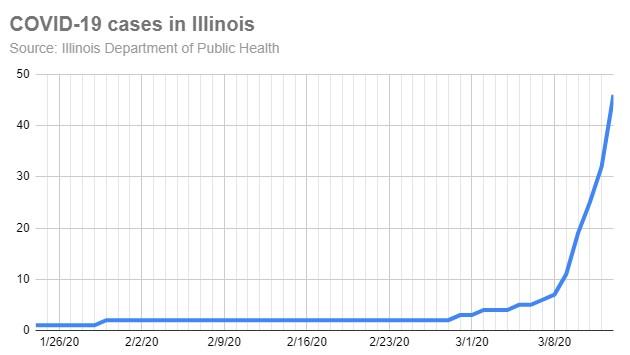 With 14 new COVID-19 cases reported in Illinois today, Gov. J.B. Pritzker, at an afternoon news conference, announced that he’s ordering all schools across the state to close for two weeks.

The statewide closure order — which will affect more than two million public and private school students — would take effect after Monday’s classes, Pritzker said, to give teachers time to provide instruction for students on what to do for e-learning or paper assignments during the time away from the school building.

Schools in Evanston announced plans Thursday evening to close at the start of next week and remain closed until after spring break.

Pritzker said the increasing number of cases of the pandemic virus led him and other state leaders to decide that the closure is necessary to slow the spread of the coronavirus disease and minimize the chance that hospitals will become overwhelmed with the number of patients they need to treat.

He repeatedly alluded to conditions in Italy and other areas that were slow to respond to the spread of the disease and said he wanted to make sure that Illinois did not make the same mistakes of a tardy response that they had.

With the governor’s announcement, Illinois becomes the eighth state to close schools in response to the pandemic.

Pritzker said the state would make efforts to see that substitute programs were in place to provide children from low-income families with breakfasts and lunches during the shutdown.

Dr. Ngozi Ezike, director of the Illinois Department of Public Health, said the 14 new cases include nine Chicago residents, four in suburban Cook County and one in Lake County. The ages of those involved range from the 20s to 90s.

The total number of COVID-19 case in Illinois now stands at 46. Dr. Ezike said about 30% of the cases involve people who had travelled to areas where there had been a coronavirus outbreakand 41% are people who had had contact with another person know to be suffering from the virus.

But the remaining cases “do not have a clear connection and could be the result of spread in the community.”

She said that so far no deaths in Illinois have been associated with the disease and that in the vast majoirty of cases patients are recovering. But 94% are still in isolation, either at home or in the hospital.