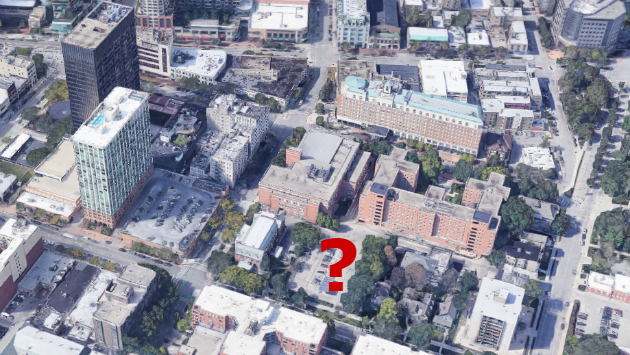 A zoning change that would have opened seven additional downtown sites to potential office development went down to defeat at the Evanston City Council’s Planning and Development Committee meeting Monday night.

The zoning text amendment proposed by Alderman Judy Fiske, 1st Ward, would have loosened restrictions on office developments in the R5 and R6 high-density residential districts at sites where those districts are adjacent to a D2 or D3 downtown zoning district.

The change was seen as a way to make it easier for a future redevelopment of the library parking lot at 1714-1720 Chicago Ave. for office use to win City Council approval by eliminating the need to rezone that individual property from the R6 to the D3 zone.

Had it been approved, an office development similar to one recently rejected at the library lot would need support from only six, rather than seven, aldermen in the face of opposition from petition-wielding neighbors.

The city’s Plan Commission had recommended against approving the zoning text amendment, with one commissioner criticizing it as “a piecemeal way of looking at a very broad topic that needs a lot of study and further discussion.”

Fiske said she wants to increae the city’s revnue so it can avoid increasing tax rates and fees and to bring new office workers to town to shop and dine to support downtown businesses.

But Alderman Eleanor Revelle, 7th Ward, said the properties affected by the change “are on the periphery of downtown and have solid residential structures in place.”

She said office buildings should be built in the core of downtown instead, cand suggests that if the city wants to expand the downtown area it should do it in a more comprehensive way.

Alderman Melissa Wynne, 3rd Ward, said she agreed with Revelle, and with the Plan Commission’s vote against the proposal.

But Alderman Ann Rainey, 8th Ward, said 70 percent of the property on the block containing the library parking lot is tax exempt and that the city should beg some devleoper to come back and build an office building there to generate new revenue.

In the end only Fiske and Rainey voted in favor of the change, while aldermen Robin Rue Simmons, 5th Ward, and Tom Suffedin, 6th Ward, joined Revelle and Wynne in voting no.

That meant the proposal died without advancing to the full City Council.

Meanwhile, Design Evanston, a non-profit group open to local design professionals, conducted a charette at a private meeting of its members on Thursday, July 18, attempting to reach a consensus on what future development of the library lot might look like.

The group promised to reveal its results at a future meeting of the City Council.