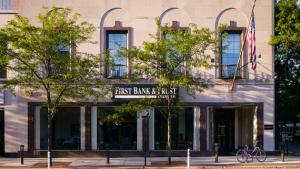 Net income of First Evanston Bancorp, Inc. for the first half of this year amounted to $2,248,000, a gain of 20 percent from the $1,874,000 earned during the same period last year, according to data reported to stockholders this week.

Robert R. Yohanan, the CEO of the holding company of First Bank & Trust of Evanston, attributed the gain to increased loan demand and to a higher percentage of demand deposits on which the bank does not pay interest.

Demand deposits, meanwhile, rose from 36 percent of total deposits to 38 percent, “a percentage which few banks in the country have achieved,” Yohanan said.

Yohanan noted that the performance of the bank’s Trust/Investment Department “has also been excellent with assets under management at historic highs.”

As for the future, the bank’s CEO says “our pipeline for new business is very good at present,” which he said is a reflection of the improving economy as well as a result of the “hard work” of its loan and trust/investment officers.

“Competition for good business loans continues to be keen,” Yohanan says, “but we are clearly getting a fair share at pricing levels and general terms which meet our standards.”