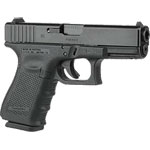 With $17,000 raised from donations to fund the program, Eddington said, it will be able to offer full price for guns like AK47s, "those guns that are exceptionally dangerous."

Gun buyback programs in Chicago and elsewhere have been criticized for offering a flat $100 for any working weapon turned in, with critics saying that's not enough to get people to turn in guns that are actually likely to be used in crimes.

"One of the most difficult things is to get criminals to turn in their guns," Eddington said. "It's like offering $100 to a plumber to turn in his tools — it ain't gonna happen."

He said the city is only interested in buying Evanston guns, "not junk from Kankakee." To that end, people turning in weapons will have to show some proof that they live in Evanston — which could be a utility bill or something similar.

"But we just want the gun," the chief said. He said police won't check whether the person turning in the weapon has a firearm owners identification card, making it legal to posess the weapon.

And he said that while weapons will be checked against a database of ones known to have been used in crimes, there'll be "no tracing the gun back to the individual who turned it in."

But he said he knows that a lot of the weapons likely to be collected will be ones unlikely to ever have been used in a crime — "something that's been in Uncle Ben's drawer forever, or a shotgun that's been in the closet, even though the owner hasn't been hunting in 15 years," Eddington said.

But even getting those weapons should cut down on accidental shootings, the chief added.

Eddington said officials will have a meeting today to work out details of the program. The mayor, he said, wants to have the gun buyback before Thanksgiving. A local church will probably be used as the turn-in site.

People turning in guns will be given gift certificates, Eddington said, most likely ones redeemable at Target or other stores in Evanston, in an effort to keep the money circulating in town.