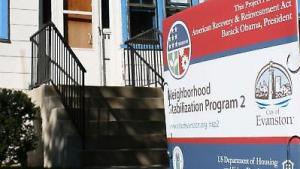 Evanston officials will tell aldermen tonight that the city has acquired 52 housing units under its $18 million federal grant and the first rehabilitated units will be occupied this summer.

City staff say the program has also far exceeded the goal set in the grant award of providing at least 25 percent of construction subcontracts to minority-owneed, woman-owned or Evanston-based businesses.

So far 77 percent of the contracts have been awarded to such businesses — many to firms that qualify under more than one category:

The grant, awarded in January 2010, is designed to rehab 100 units of foreclosed housing with half to be resold to individual owner-occupants, while the other half will be held as rentals by the city's project partner, Brinshore Development.

Under the grant the city must complete work on the program within three years. City staff says bid packages have been released for 13 properties so far, with rehab work underway on five properties.

They anticipate issuing bid packages for 16 more properties in May and plan to have 43 units in rehab by summer. They also anticipate acquiring the remaining scattered-site properties for the program during 2011.