Modified plans for the multi-million dollar Sheridan Road improvement project were presented at a public meeting Thursday evening in the Parasol Room at the Civic Center. 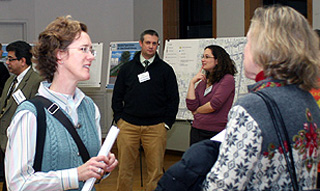 Senior transportation engineer Sat Nagar said the project has drawn a generally favorable response, and that several modifications suggested by residents have been included in the latest version of the plan.

Three new traffic signals are planned as part of the project.

One would be located at Sheridan’s intersection with Church Street, which also would be reconfigured to make pedestrian crossings safer. 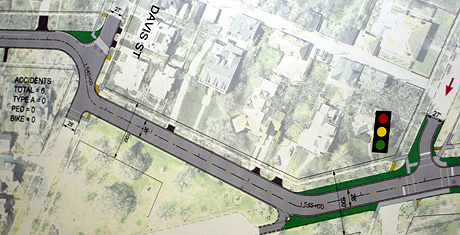 Wider parkways, shown in green on project drawings, are designed to better channel traffic flow and improve pedestrian safety, as in the area shown here between Davis and Church Street. As part of the separate lakefront master plan, the current park entrance at Church would be moved north to Clark Street.

The other lights would be located at the turn where Sheridan meets Campus Drive and at the parking lot entrance between Garrett Place and Library Place on the Northwestern University campus.

Alderman Cheryl Wollin, 1st Ward, said after looking over the plans that they look "pretty good" to her.

The project is expected to cost about $6.6 million dollars — with all but about $600,000 of the funds coming from the state and federal governments. 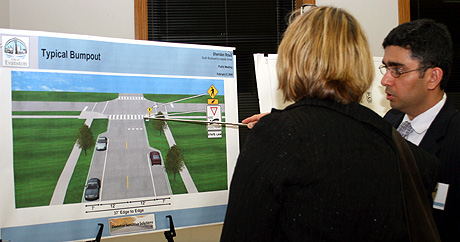 A project planner shows how bumpouts at intersections would reduce the time that pedestrians crossing the street would be exposed to traffic.

Sheridan Road is now controlled by the state. To get the project done, the city has had to agree to take over control of the road, and responsibility for future maintenance costs.