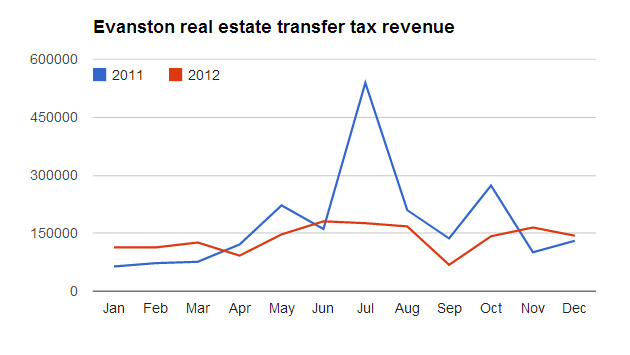 Property sales in Evanston fell slightly short of city officials' projections last year and were well below the total for 2011.

The Real Estate Transfer Tax report presented to the Economic Development Committee Wednesday night showed that the city's 0.5 percent tax on the selling price of properties in town generated $1.635 million in 2012.

That was 5 percent below the $1.725 million city officials had projected a year ago in setting the city's 2012 budget.

The 2011 number was boosted by the $55.6 million sale in July that year of The Reserve, a large apartment complex in the 1900 block of Ridge Avenue. No sales of similar size occurred in 2012.

Alderman Jane Grover, 7th Ward, noted that some properties are continuing to sell for high prices. "Look at all the million-dollar sales," Grover said, looking at high-end transaction details for December.

Rainey suggested the tax revenue was being enhanced by the activities of Col. James N. Pritzker. The billionaire has won approval for one bed and breakfast on the Evanston lakefront and has acquired other properties in the area.

"God bless him," Rainey said, "We are so lucky to have him."

But Alderman Judy Fiske, 1st Ward, who was chairing the meeting and who has opposed Pritzker's bed and breakfast plans, said, "We're not going to talk about that at this committee."