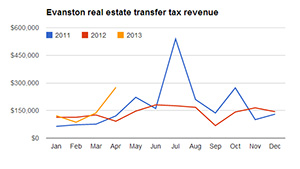 Real estate sales in Evanston surged in April to their highest level in nearly two years.

Transfer tax revenue for the year so far, though, still lags the city's budget forecast by 11 percent — as a result of slow sales in the first quarter.

Seven properties sold for over $1 million in Evanston last month. The biggest transaction, at $3.54 million, involved the commercial building at 1633-35 Chicago Ave. that houses a PNC Bank branch and Dave's Italian Kitchen. It was sold by 1633 Chicago LLC to Chicago-Davis Development LLC.