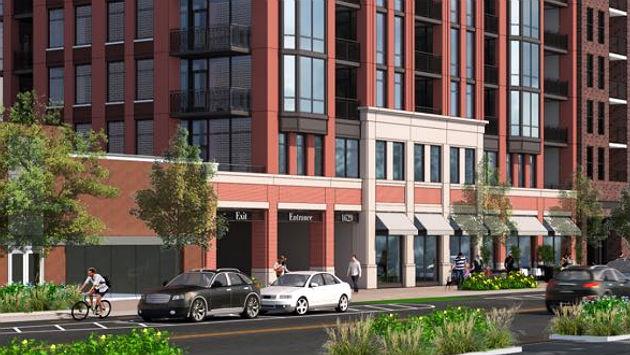 City Engineer Lara Biggs said the city wants new buildings to have their parking access off alleys. She said the decision to have auto access from the street appeared to be primarily based on an aesthetic preference and that shouldn’t override concernts about pedestrian and bicyclist safety.

And he said dumpsters, utility poles and other obstructions in the alley, along with the frequent blockage of the alley by delivery vehicles, make the alley entrance option impractical.

A view down the alley from Church Street around 4:30 p.m. Wednesday afternoon, showing obstructions from power poles and dumpsters making it difficult for cars to pass each other.

A survey diagram showing obstructions at the south end of the alley near Davis Street.

Some of the biggest obstructions in the alley are at its south end, where window wells and fire escapes from the existing Merion building make it impossible for vehicles to pass each other.

Jessica Hyink, the city’s transportation and mobility coordinator, said the building design needs to protect the most vulnerable people — pedestrians and bicyclists — rather than privileging cars.

Biggs added that the city and Northwestern University spent millions of dollars and countless hours trying to engineer a safe, protected bike lane to downtown from the campus and the proposed high-rise design would reduce those protections.

Jonathan Perman, a consultant for the developer, said the city has lots of curb cuts and has been inconsistent in recent years about their placement — including curb cuts even in the city’s own parking garages.

He argued that the impact of the curb cut at the new development, with just an 85-car garage, would be far less than that at the city garages that have a total of several thousand spaces.

But Scott Mangum, the city’s planning and zoning manager, said that since the developers own most of the property on the block on the west side of the alley they could “clean up” some of the alley obstructions and achieve a benefit for the new development in doing so.

Michael responded that it appeared the city was trying to draw a line in the sand that would block any new development along the bike path.

Mangum did offer praise for the developers’ decision to provide underground parking, rather than an above-ground parking deck, but he suggested the overall 211-foot height of the building was “pretty excessive” compared to what’s specified in the zoning code and to allowances the city has granted other developments.

But Michael said “the economics didn’t pan out” when they considered a lower height for the senior-living development.

Mangum also suggested that the development needs to provide more in the way of public benefits to the community.

At the end of the meeting the developers requested that the committee postpone making a recommendation on the project so they could return to a future meeting DAPR meeting. “We’ll see if we can tweak this for you and address some of the comments,” Michael said.Rela