A handful of activists with a theatrical flare staged a protest in front of the Dawes Mansion today demanding that Northwestern University hand the building over to the Evanston History Center. 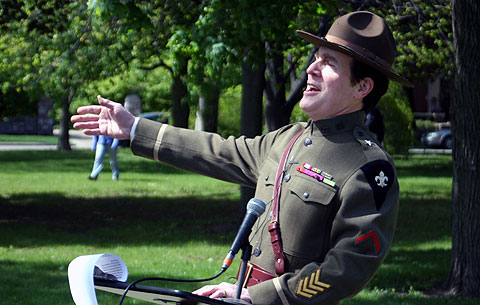 The group hired Chicago actor Robert Lindsey to play the role of General Charles Gates Dawes returning from his grave at Chicago’s Rosehill Cemetery to reclaim his one-time home from the school.

As Northwestern police officers watched from the building’s steps, local activist Mimi Peterson assailed the university saying of school officials, "Do these people have no shame?" 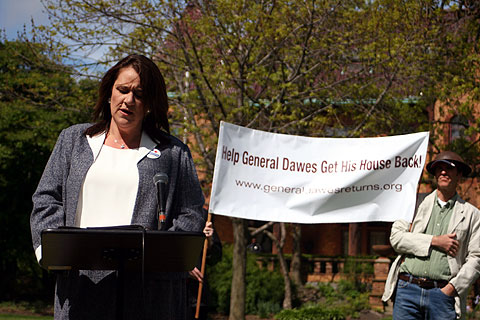 Peterson argued that the university, which has allowed the history center to use the building rent free for the past half century, should give the building, and an endowment that General Dawes left the school, to the history group.

University officials say the building needs an estimated $4 million in repairs. They say the Dawes endowment, roughly $1.5 million, would be insufficient to pay for immediate repairs, let alone ongoing maintenance needs at the 25-room mansion. 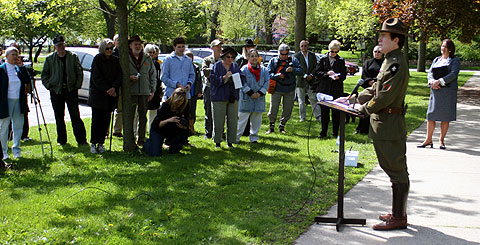 University officials reportedly have been negotiating with leaders of the history center, who did not attend today’s protest, about working out a temporary lease extension that would reopen the basement archives and first floor rooms of the center to limited public use if relatively minor fire-safety improvements were made on those floors.

The university has said it ultimately plans to either sell the property or use it as housing for a university employee.

Because of the building’s single-family residential zoning and location in a local historic district, it would require City Council approval to redevelop the site for any more intensive use.