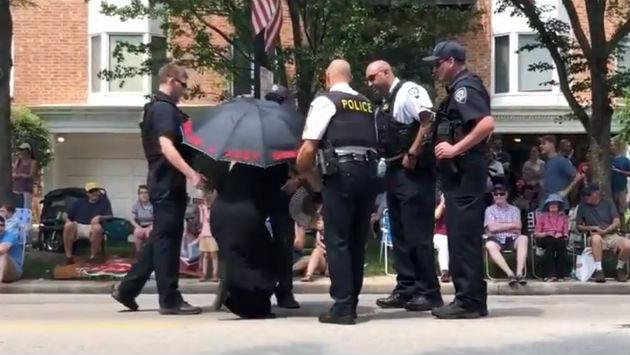 A woman protestor that police said sat down in the middle of Central Street, blocking the Evanston Independence Day parade Wednesday, was arrested and charged with disobeying police. This among the stories in today’s daily crime bulletin.

Michele S. Hays, 50, of 712 Dobson St., was arrested by police, who said she sat down in the middle of the roadway at Central Street and McDaniel Avenue at 2:08 p.m. yesterday, blocking the progress of the parade. She is due in court on Aug. 9 at 9 a.m. to face a charge of disobeying police.

A YouTube video of the incident posted by Scott Brewer.

Police received a report of a man with a gun in the 200 block of Custer Avenue at about 11:20 p.m. Tuesday. They checked the area but found no man with a gun.

A purse containing cash was taken from an unlocked 2016 Honda in the 700 block of South Boulevard between 3 a.m. and 9 a.m. yesterday.

A bicycle was taken from an unlocked garage in the 600 block of Oakton Street between 9:50 a.m. and 11 a.m. yesterday.

Small holes from a BB gun were found on the garage of a home in the 1600 block of Dempster Street at about 4:15 p.m. yesterday.

Someone set fire to a dumpster in an alley in the 2000 block of Dewey Avenue just before midnight yesterday.

Graffiti was found on the golf course at Colfax Street and Poplar Avenue at 1:32 p.m. Tuesday.

A registration sticker was removed from a 1999 Lexus at a junk yard in the 2500 block of Oakton Street around noon on Tuesday.

Alcoholic products were taken from the Walgreens Pharmacy in the 600 block of Chicago Avenue around 7:48 p.m. yesterday.