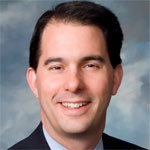 SPRINGFIELD — Wisconsin Gov. Scott Walker’s appearance in Springfield on Tuesday falls during the same week Illinois’ governor is to release recommendations for dealing with the state’s pension crisis.

SPRINGFIELD — Wisconsin Gov. Scott Walker’s appearance in Springfield on Tuesday falls during the same week Illinois’ governor is to release recommendations for dealing with the state’s pension crisis.

The Illinois Chamber of Commerce invited Walker, a controversial Republican, to speak during its business lobby day because of Walker’s experience addressing Wisconsin’s fiscal problems.

Walker faces a recall vote after signing a law that eliminated collective-bargaining rights for most of Wisconsin’s public employees. The move caused an uproar among Wisconsin unions.

Union workers, possibly hundreds, from Illinois and Wisconsin are expected to protest during Walker’s visit, according to a union official and information circulating on social media networks.

“We plan to run him (Walker) out of town,” said Anders Lindall, spokesman for Illinois’ chapter of AFSCME, the American Federation of State, County, and Municipal Employees.

“Wisconsin’s budget deficit was only caused from huge corporate tax breaks. Walker called the legislature into a special session to pass these give-aways,” Lindall said, “And now he uses the deficit as an excuse to attack middle class people.”

Whitley said the chamber believes pension and Medicaid reform are needed to help fix the state’s finances, and those reforms must happen this spring.

Last year, Wisconsin passed a pension law increasing the amount public employees must put toward their pensions. Before the law, workers paid in less than 1 percent of their salaries toward pensions. Under the new law, public employees pay 5.8 percent to 6.65 percent, but they keep their current pension benefits.

In Illinois, most public employees pay more than that, except for state employees contributing to social security, who only have to pay 4 percent.

“The pension program must be restructured. It’s not sustainable if we go forward as is,” Whitley said. “All we are doing is putting ourselves at risk of collapsing and not being able to provide retirement benefits to workers.”

Whitley said the chamber supports raising the retirement age and an increase of contributions by public employees.

Lindall said AFSCME supports changing the pension system, as long as the changes are fair and constitutional. He also said he thinks Illinois’ problem should be solved by Illinois legislators — not by someone from Wisconsin.

“Scott Walker doesn’t know a thing about Illinois pensions," Lindall said. "We shouldn’t be taking advice from the third governor in American history to possibly be removed from office."