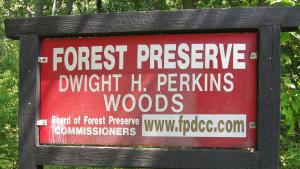 How do you rehab a chunk of the forest preserve? Neighbors of Dwight H. Perkins Woods, on Evanston’s northwest side, are about to find out.

Larry Suffredin, himself a neighbor as well as a Cook County Forest Preserve District Commissioner, is hosting a public forum next week on upcoming improvements for the land.

The forum is scheduled for Sept. 4 at 6:30 p.m. at Lincolnwood Elementary School, 2600 Colfax St., which is adjacent and just to the east of the preserve.

Noting that the forest preserve system was conceived at a meeting at Perkins’ house on Lincoln Street nearly 100 years ago, “I would like to take this opportunity to invite the public to a meeting to discuss refurbishing the trails and a restoration program that will remove diseased and invasive trees at Dwight H. Perkins Woods,” Suffredin said in a news release.

“This work should make Dwight H. Perkins Woods safer and an improved location to see increasing numbers of native trees, flowers, and plants,” he added.

Perkins Woods is the only holding of the Forest Preserve District in Evanston.  The mission of the district. Suffredin noted, “is to protect and preserve the natural forests and lands, together with their flora and fauna, as nearly as may be, in their natural state and condition, for the purpose of the education, pleasure, and recreation of the public.”

Neighborhood lore has it that the commissioners were so grateful to Perkins for his help in founding the district that they asked him to select a parcel of land near his Evanston home, before the area was built up, that would be purchased by the district and named in his honor.