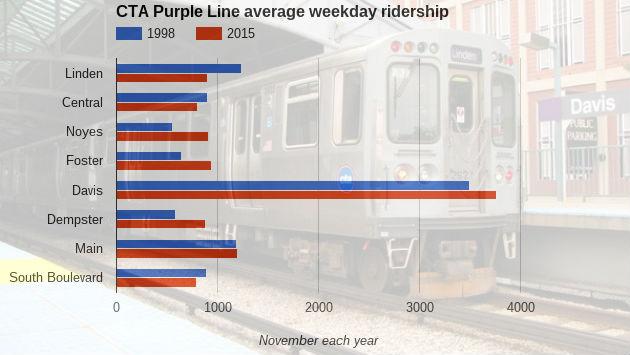 New figures show that ridership on the CTA Purple Line through Evanston has increased in recent years — but by far less than the gain in overall ridership on CTA rail lines.

Comparing the latest data available from the RTA, for November 2015, with the same month in 1998, the first year for which such data is available online, shows Purple Line ridership north of Howard Street up 6.8 percent.

But ridership on the system overall is up 43 percent over the same period.

The biggest percentage gains in ridership on the Purple Line occurred at Noyes, up 65 percent; Foster, up 47 percent, and Dempster up 50 percent.

But ridership was down 27 percent at Linden, and 11 percent at both Central Street and South Boulevard.

Ridership at the line's most heavily used station — Davis Street — was up nearly 8 percent, while it increased a meager 0.6 percent at Main Street.