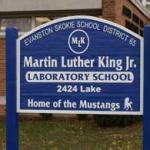 The Evanston/Skokie District 65 School Board is expected to rectify tonight an error it made on June 17 when it approved the renaming of the district's two magnet schools.

It came out in the minutes, however, that the board had officially renamed it Martin Luther King Literary and Fine Arts School, which would effectively name it after the noted civil rights leader's father.

So tonight, one of the items on the Consent Agenda, which contains the non-controversial items that are slated for approval without discussion, there is a motion to give it the name the committee had recommended: Martin Luther King, Jr., Literary and Fine Arts School.

It remains to be seen whether district administrators, teachers, students, alumni and…yes, we'll say it, the press…will continue to refer to the school informally as King Lab.