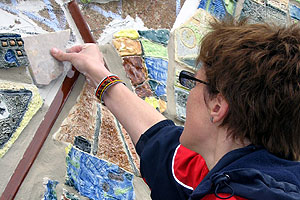 Artists are at work this month on an unusual public art project near Main Street and Chicago Avenue in Evanston.

The Open Studio Project has partnered with the Chicago Public Art Group to create a mural on the CTA retaining wall facing the Main Street Metra station.

But it’s not the usual painted mural — it’s a work of mosaic artistry. 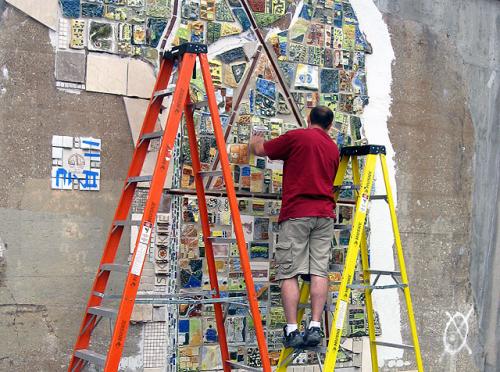 The first portion of the mural — a map of Evanston — is nearly completed. And work will continue on down the retaining wall through June and much of July.

The lead artist on the project, Sonata Kazimieraitiene, will be working with young people and adults to complete the mural, which is scheduled to be dedicated at 4 p.m. on Thursday, July 30.

In the meantime, the Open Studio Project is hosting an exhibit at its Gallery 901, at 901 Sherman Ave., through July 2, that shows plans for the project and tiles that will be included in it.

The project is funded with a $22,500 grant from the city’s Community Public Art Program.

Brenda Vega of the Chicago art group told aldermen when they approved the project last December that the technique has been used for murals in Chicago, some of which are now 20 years old and have not needed to be replaced.