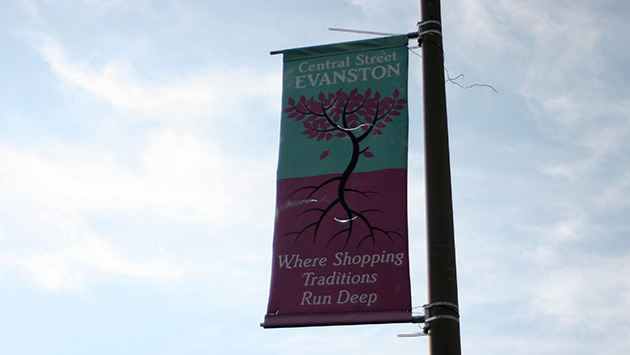 A light-pole banner on Green Bay Road — one of many around town.

Public Works Director Suzette Robinson told aldermen on the Administration and Public Works Committee this week that it costs the city close to $210 to install one banner — while it receives only a $35 permit fee from the organization requesting it.

In addition, the city pays for many of the banners through economic development grants to neighborhood merchant groups.

Robinson also voiced concern about risk of injury to city workers erecting the banners on busy streets and potential liability issues if a falling banner caused a traffic accident or injured a pedestrian.

City Attorney Grant Farrar said he didn't have any hard statistics about the legal risks "but there's always a potential for liability."

And Robinson said leaving banners up all year — the practice now — leads to having them look worn and tattered and increases maintenance runs for removals and replacements.

She suggested only displaying banners from May through October, limiting their use to city-sponsored events and banning them from heavily-travelled four-lane streets like Green Bay Road and Ridge Avenue.

But committee members raised a number of objections.

Alderman Ann Rainey, 8th Ward, said she doesn't like banners herself, but thought major institutions in town — like St. Francis Hospital should be able to use such banners to promote themselves — even on busy streets like Ridge — at least as long as they hire a private company to put the banners up.

"Maybe the city should get out of the banner business itself, except for economic development projects," Rainey added.

Alderman Peter Braithwaite, 2nd Ward, said he thought individual businesses — like Chicago's Home of Chicken & Waffles on Dempster Street in his ward — should be able to put up banners.

But Robinson said that part of Dempster is controlled by the state transportation department, which probably would not permit advertising for a private business.

And she noted that the city doesn't have any policy now about restrictions on the content of banners. Farrar said there's no free speech right of unlimited access to the poles — so the city could impose any reasonable restrictions it chose. 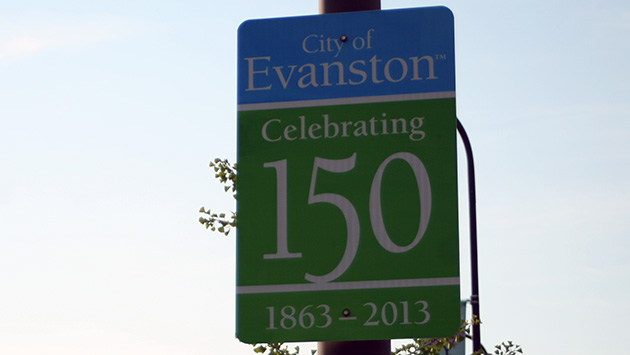 One of the new 150th Anniversary signs.

City Manager Wally Bobkiewicz said that promotion of business districts could be handled by metal signs — like those recently erected to mark the city's 150th anniversary.

He said a new sign policy would be coming before the city's Transportation and Parking Committee soon.

Bobkiewicz said that signs would be much less expensive for the city to install and maintain than banners, and "Green Bay and Ridge are lovely streets without banners."

"The city funds lots of banners," Bobkiewicz added, and "those dollars are a scarce resource."

Banners, he suggested, should only be used to promote something special, "and we seem to be getting away from that."

He said staff would return to the City Council with a revised banner proposal soon.