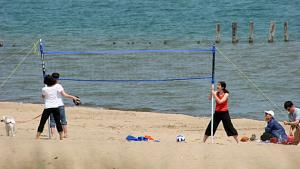 After some Evanstonians complained about the city's new free-beach pass program for teens — launched after many folks had already bought their beach tokens for the season, Evanston Now asked City Manager Wally Bobkiewicz how the program's going.

Here are the questions we asked and the e-mailed responses we received.

Q: How many free beach passes have been distributed so far? What's the expected number for the full season?

Q: What's been the impact on sale of full-price beach tokens?

A: Not sure until Summer concludes.  It our expectation that many of the users of these free beach passes are not regular purchasers of beach tokens.

Q: Is the city still distributing free beach tokens through social service agencies as it has done in recent years — and if so, what impact has the new program had on the earlier one?

A: Yes.  No impact seen at this point.

Q: Overall, for the season, what impact is the new program expected to have on city revenue?

A: Not sure until Summer concludes.  It our expectation that many of the users of these free beach passes are not regular purchasers of beach tokens.  The City already has given away free tokens in the past and we see this as an extension of that existing program.

Q: When was the new program approved by the City Council? If it wasn't approved by council, why not, given its potential for reducing city revenue?

A: The free beach pass program is seen as an extension of the existing program to give away free beach tokens, so no need for additional approval.

Q: Why was the program not announced until after many residents had already purchased tokens at the pre-season price? Will refunds be offered to those who feel they were misled by the late announcement of the new program?

A: The free beach pass program is an initiative that has come out of the Mayor's Safe Summer Summit.  The timing of the program was coordinated with that initiative and is geared at youth that likely were not regular users of the beach.  There are no plans to offer refunds for beach token purchases.