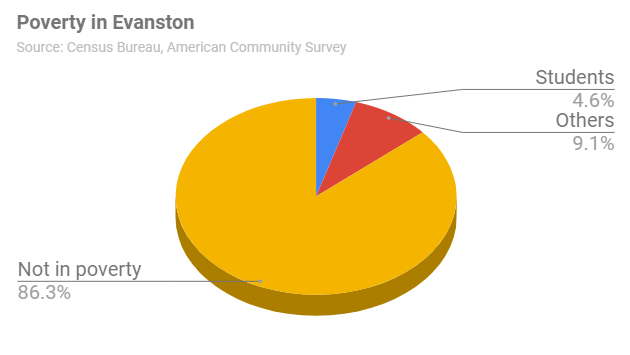 A new Census Bureau study says a third of the people living in poverty in Evanston are college students living off campus.

Evanstonians have long assumed that students added to the city’s overall poverty rate, currently at 13.7 percent, But the new study, based on an analysis of data from the American Community Survey, offers some real numbers — for Evanston and other college towns around the country.

Students living on campus aren’t included in the calculation of poverty rates.

Of Evanston’s total population of 74,756 people, according to the Census Bureau’s 2017 estimate, more than 6,200 live on campus or in other group quarters, leaving 68,487 people to be included in the poverty rate calculation.

Of course, at least for students preparing to enter lucrative careers, their poverty status is more likely to be temporary than for other low-income residents.

The Census Bureau says off-campus students increase the poverty rate in a lot of college towns.

In Illinois, in addition to Evanston, those include Carbondale, Champaign, Charleston, Chicago,  DeKalb, Edwardsville, Macomb, Normal and Urbana.