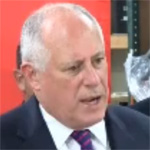 "If we don't deal with this problem right now, it'll just get worse," he said. "It'll be billions and billions of dollars out of balance. We can't afford that."

Quinn's proposal relies on three areas to achieve $2.7 billion in savings and reductions:

In his budget address, Quinn said the state must find $2.7 billion in savings from the Medicaid program to prevent the collapse of the safety net, on which 2.7 million Illinois residents rely.

That doesn't even address the $1.9 billion in overdue Medicaid bills the state is pushing off until next year.

Without serious cuts and reforms, Quinn insists Medicaid will — at best — eat up money that needs to be spent on education and public safety or — at worst — collapse completely.

Ending the Illinois Cares Rx prescription program for 180,000 people, eliminating adult dental care for 172,000 patients and a moratorium on new admissions to intermediate care nursing facilities are just three of the 58 items Quinn targets for cuts and reductions.

The proposal is the product of a Medicaid working group Quinn assembled earlier this year.

State Rep. Sara Feigenholtz, a member of the group, said it's not an official recommendation from the group, however.

"This is where we've left things," said the Chicago Democrat.

"We're full force in moving forward and achieving that $2.7 billion in cuts," she said.

Bellock said the working group is scheduled to meet Tuesday to continue talks about how to reach the projected savings through cuts in services, instead of through decreases in what Medicaid providers are paid and a increase to cigarette taxes.

Critics are speaking up about the proposed changes to Medicaid, as well as the cigarette tax.

Maryjane Wurth is president of the Illinois Hospital Association, which lobbies on behalf of hospitals. She said that many hospitals would be forced to eliminate services or lay off workers, under Quinn's proposal.

"A (provider rate) reduction of this magnitude will jeopardize patients' access to quality health care, cause irreparable harm to the Medicaid program and the health care system, and undermine hospitals in their critical roles as health care providers and major job creators," Wurth said in a written statement.

Quinn said rate reductions would not cause a health-care recession in Illinois.

Without the smaller rates, he said, the Legislature will have to cut $675 million elsewhere in the budget, including adding state facilities to the current list of 14 set for closure under the governor's budget.

"If they want cut another $675 million out of the rest of the budget they're going to have more facilities close and less money … for our schools, and I don't think that's prudent at all," Quinn said.

State Sen. Dale Righter, R-Mattoon, is a member of the working group. Quinn's threat of additional closures and less money for education is based on a false threat, Righter says.

"What we'll have to do is go back to work and do what the governor originally said that he thought we needed to do, which is reduce the Medicaid program by $2.7 million."

Righter said reducing provider rates and raising taxes aren't cuts, exactly. The latter would probably be the toughest aspect of Quinn's proposal to pass. While a $1-a-pack tax on cigarettes has twice passed the state Senate in the past two years, it has quickly died in the House.

"I don't think it's something my caucus is going to like," Bellock said about the cigarette tax increase.

Feigenholtz said one thing is sorely needed to right the Medicaid system.

"You know what we need? Political will," she said.

Kristi DeLaurentiis, chair of the advocacy and public policy committee of the Illinois division of the cancer society, said, "Smoking remains the leading cause of cancer and this proposal will not only reduce the burden on the state’s Medicaid program for years to come, but more importantly, it will save lives and improve the health of people across Illinois, particularly in curtailing youth smoking."

"If the cigarette tax increase passes, we estimate that more than 70,000 youth will never smoke and more than 38,000 current Illinois residents will be spared from premature death caused by smoking, DeLaurentiis said.