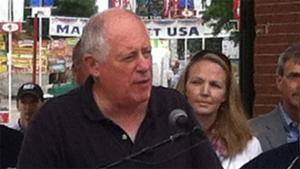 SPRINGFIELD – Want to know what conditions are like inside Illinois’ prisons? You’ll have to take someone else’s word for it.

SPRINGFIELD – Want to know what conditions are like inside Illinois’ prisons? You’ll have to take someone else’s word for it.

And for the most part, that someone has to be the state of Illinois or the union that represents correctional officers and other prison workers.

Gov. Pat Quinn, a Democrat, is steadfast in his opinion that media tours of the state’s taxpayer-funded prisons, even the minimum-security ones, are a security risk and not a good idea.

“Prisons aren’t country clubs. They’re not there to be visited and looked at. I think we have to make sure they’re secure, and I think the security of the public is paramount when it comes to prisons,” Quinn said during questioning by reporters after he cut the ribbon for the 2012 Illinois State Fair in Springfield.

The issue of prison tours gained traction this week after a report by Chicago public radio station WBEZ that one of its reporters was turned down when he asked for a tour of the minimum-security prison in Vienna to investigate conditions there for prisoners.

Other reporters’ prison tour requests have been turned down, as well.

“I think it’s important that we listen to those who are on the front line at the prison with respect to working there and understanding their decisions regarding the safety of the prison,” Quinn said Friday. “Our corrections officials who are running the prisons are wardens. They have expertise that we ought to pay attention to.”

But Alan Mills, legal director at the Uptown People’s Law Center in Chicago, which represents Illinois inmates in legal cases, said Quinn is off base.

“Clearly, not only is it in the public’s interest, I think it’s the public’s right to know what’s going on in the prisons. Government should never be able to force the public to rely on its own version of the events. That’s what journalists and outside watchdogs are for,” Mills said. “The argument about security is hogwash.”

Mills said state officials have allowed tours of the Stateville and Dwight prisons regularly, and they have run tours of Tamms “when it suits their interests.”

“So there is no reason why they can’t run a tour and allow access to a medium-security prison. Do they have to assign someone to walk you through? Yes, but so what?” he said. “I think the public is legitimately able to conclude from their refusal to let people in that they don’t want people to see what’s going on in there.”

The union that represents corrections officers, the American Federation of State, County and Municipal Employees, has publicized reports from the last month about violence in the state’s prisons. But it’s impossible to confirm the reports because the Illinois Department of Corrections will not release incident reports – even versions with sensitive information blacked out – that document the alleged occurrences.

On June 26, Illinois Watchdog (formerly Illinois Statehouse News) filed a Freedom of Information request with the department seeking records about security incidents and resulting injuries to inmates and staff at each Illinois correctional facility. Watchdog also asked for all documents that describe the cause and nature of the incidents and injuries, from May 2007 to present.

The request was an attempt to independently confirm if, indeed, violence was on the rise in the state’s prisons and to gauge the severity of the violence.

The department’s FOIA officer denied Watchdog’s request, citing an exemption in state law that allows them to withhold “records that relate to or affect the security of correctional institutions and detention facilities.”

“Each of these records is utilized by the department for increasing security at a facility after an incident has occurred,” the department’s FOIA officer replied in a letter.

The records additionally were denied citing an exemption that allows withholding documents that “disclose unique or specialized investigative techniques other than those generally used and known or disclosed internal documents of correctional agencies related to detection, observation or investigation of incidents of crime or misconduct, and disclosure would result in demonstrable harm to the agency….”

The department of corrections did provide a chart showing the number of violent incidents by month and by year, but there was no supporting data for the numbers.

Illinois Treasurer Dan Rutherford, a Republican and former state senator, for years led tours of the Pontiac and Dwight prisons for members of the General Assembly and the media. He said he understands first-hand that laying eyes on the inside of a prison is extremely valuable when forming or reporting on public policy and state funding.

He said he suggests the governor invite the media into the prisons “unless he’s trying to hide something.”

“I can appreciate the governor is concerned about public safety. I am too. Prisons are not tourist attractions, and for him to say they’re not country clubs, he’s absolutely right,” Rutherford said.

“But to preclude the public under very reasonable requests to have first-hand sighting of how their tax dollars have an effect on policy and how it’s conducted is inappropriate.”

Laurie Jo Reynolds, organizer of Tamms Year Ten, a grassroots campaign to educate people about the effects of long-term prison isolation, said she believes the corrections department under the Quinn administration is more transparent than it was under the administration of former Gov. Rod Blagojevich, but that more transparency and accountability undoubtedly will improve the state’s prison system.

“It is important that legislators understand the consequences of all the increased sentencing, mandatory imprisonment, reduction of good time and other tough-on-crime policies that they use to get re-elected,” she said, noting also that limited knowledge comes from walking through a prison on one tour.

“For example, you can’t see the effects of long-term segregation and isolation. You can’t see how long people have been in solitary confinement or their mental-health histories,” she said. “This takes more in-depth reporting, and news media historically has not shown that commitment.”