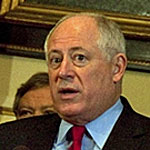 SPRINGFIELD — Gov. Pat Quinn's pension reforms give public employees two choices: get on board with his reforms or face a smaller pension and no state help for retiree health care.

SPRINGFIELD — Gov. Pat Quinn's pension reforms give public employees two choices: get on board with his reforms or face a smaller pension and no state help for retiree health care.

Quinn detailed his proposal to fix Illinois' ailing public pension system, which will consume 15 percent of the state's operating budget this year, up from 6 percent in the fiscal 2008 operating budget.

"We cannot let that continue to grow and grow and grow," Quinn said Friday at a Chicago news conference, later adding that "this is not a time for timidity, this is a time for fortitude."

Beyond eating up more of the budget each year, the state's public pension system is facing a $83 billion shortfall.

Quinn's plan would have current employees:

His plan would not affect current retirees.

Illinois is set to spend $950 million on retiree health care next fiscal year, according to an April 9 report from the Illinois Policy Institute, a right-of-center think tank.

"You can't have both. You cannot have the current retirement plan and have the state of Illinois subsidize your health care," Quinn said.

The public unions covered by public pensions came out swinging after Quinn's announcement.

"We strongly disagree with the proposals made today. Considering that the subject at hand is the ability of hundreds of thousands of Illinoisans to support themselves in retirement, we believe the proposals are insensitive and irresponsible" Illinois AFL-CIO President Michael Carrigan said in a statement.

Carrigan's response, which was made on behalf of a coalition of Illinois public unions called "We are One Illinois," did not offer a counter-solution or proposal to Quinn's plan.

Quinn's plan also includes pushing more of the costs of teacher pensions onto school districts, and having universities paying more for their employee's tuition. During his Friday news conference, however, Quinn did not set a schedule for when this would happen, or how much he wanted school districts and universities to pick up.

State House Republican Leader Tom Cross, R-Oswego, has been pushing legislation to rein in the cost of public pensions for the past two years. He said Quinn's plan has some "really good aspects," except for shifting pension costs to school districts and universities.

"That, in my mind, is a property tax increase," Cross said.

"Universities, community colleges and school districts should assume the responsibility for normal pension costs of their employees. Cullerton would support a proposal to phase in this plan in a way that gives districts time to consider how to assume that responsibility appropriately," Rikeesha Phelon, Cullerton's spokeswoman, said.

Quinn's proposals must make their way through the meat grinder of the Legislature before they can be signed into the law, which is enough to cause a hint of concern for some.

"The governor's announcement today demonstrates important movement toward solving our pension problems, but the devil is always in the details," said Ty Fahner, president of the fiscal watchdog and pension reform advocacy group, the Civic Committee of the Commercial Club of Chicago.

The worry in everyone's mind when talking about any pension changes is a clause in the state constitution that calls public pension "an enforceable contractual relationship, the benefits of which shall not be diminished or impaired."

Cross warned Friday that the state must be prepared for a legal fight.

"I think at the end of the day, regardless of what we do, it is going to end up in the court," Cross said.

Judging from the public union's response, Cross' prediction would be fulfilled.

"Forcing public servants to choose between two sharply diminished pension plans is no choice at all. It is a clearly illegal attempt to solve the problem," Carrigan said.

Details of the pension proposal (from CapitolFax.com)