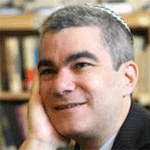 Rabbi Brant Rosen, of Evanston's Jewish Reconstructionist Congregation, reportedly has resigned because of what he said is long-standing tension over his support for Palestinians in their conflict with Israel.

Rosen, who's been at the JRC for 17 years, told the Chicago Tribune that no specific incident led to his resignation, but that his views "deeply pained" some members of the congregation creating a divide he no longer felt he could bridge.

On his blog, rabbibrant.com, Rosen has frequently criticized Israeli policy, including the recent Israeli invasion of Gaza.

Rosen is expected to remain on duty for several months as the congregation searches for a new leader.