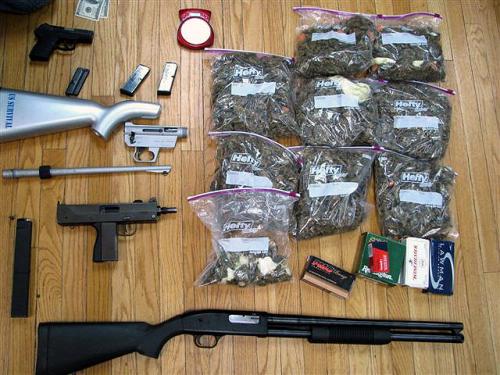 Evanston police say they recovered 10 pounds of marijuana and several guns during a raid this morning at 1731 Grey Ave.

Evanston police say they recovered 10 pounds of marijuana and several guns during a raid this morning at 1731 Grey Ave.

Guns and drugs police say were confiscated in this morning’s raid. (EPD photo)

Police Commander Tom Guenther says that because officers believed people in the building might be heavily armed, the department’s Neighborhood Enforcement Team brought in 29 officers from neighboring communities to assist in executing a search warrant on the property about 6 a.m.

Guenther says the police used flash-bang devices when they broke through the entry doors to stun and surprise anyone who might be inside.

Guenther says police arrested Allen V. Lomax, 20, of 1731 Grey at the scene on weapons charges, including possession of a weapon by a convicted felon. Another resident of the building, Travis J. Johnson, 25, later turned himself in at Evanston police headquarters and faces drug charges.

Both men are scheduled to appear in district court in Skokie on June 11.