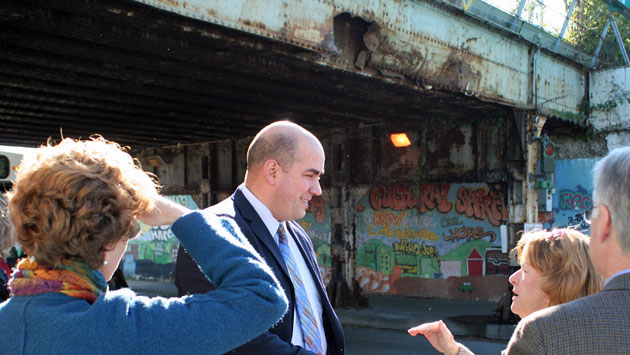 Officials from Metra and Union Pacific are on a tour this morning of the aging commuter rail facilities in Evanston organized by city officials who hope to see them upgraded.

City Manager Wally Bobkiewicz said now that the city has worked with the CTA to get its infrastructure upgraded — including three new viaducts being installed over the next year — it's time to work on upgrading the other rail line through the city.

Metra's new executive director, Alex Clifford, was on this morning's tour. Bobkiewicz says he knows Clifford, who's been on the job about a year, didn't arrive "with a big pot of money." But he said he hopes that getting a first-hand look at the conditions will help in getting cooperation on efforts to improve them.

The tour started at Howard Street, where Alderman Ann Rainey, 8th Ward showed damage to the viaduct where it's been hit by trucks.

A Union Pacific official on the tour, Wes Lujahn, the railroad's public affairs director for Illinois, said the rail line has 20,000 structures to maintain and defended the viaducts in Evanston as being structurally sound.

He also said that the railroad does not paint viaducts, but is willing to cooperate with communities on a program to have them painted.

He was non-committal about what might be done to repair the damage to the Howard Street viaduct.

Update 5 p.m.: After the tour ended, Matt Swentkofske, the city's intergovenmental affairs coordinator, said the officials had discussed how integral Metra and the CTA are to transit-oriented development and other efforts to build Evanston's economy.

He said the session was part of a process of working together to obtain needed funding to make sure the entire Metra system is in what Clifford called "a state of good repair."

Much of that effort is expected to involve working with members of the state's congressional delegation to get more federal aid for mass transit projects.

Swentkofske also said city officials had thanked the Union Pacific representatives for the railroad's fast response to complaints about graffiti on railroad property.

As they walked past the Lincoln Street viaduct, which has been hit with graffiti several times in recent weeks, Swentkofske said the city's community and economic development director, Steve Griffin, said the railroad often is able to paint over graffiti within a couple of hours after the city alerts the railroad to the problem.