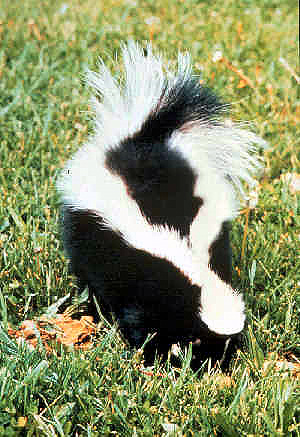 Alderman Ann Rainey, 8th Ward, complained at Monday’s City Council meeting about an invasion of skunks in her ward.

And, less than two days later, the city staff has responded — with a news release.

It seems, from the release, that the problem is us. People are letting their yards and buildings become desirable homes for skunks.

Skunks will burrow under sheds, homes, businesses, porches, decks, crawlspaces and woodpiles to create a home. They will enter foundation openings to get to these spots or create a skunk holes themselves.

One way in which skunks can be abated from your property is by exclusion. Exclusion in this case is the elimination of all possible sites of habituation where they might make their dens. Remove the den sites under and around structures such as garages and homes.

Now here’s where it gets fun, with details about how to evict the skunks …

Seal all possible entrances along the foundation, but leave the main burrow entrance open. Sprinkle a thin layer of flour two feet in circumference on the ground in front of the opening. After dark, examine the flour for tracks that indicate the skunk has left to feed. If tracks are not present, reexamine in about an hour.

After the den is empty, cover the remaining entrance immediately. Cover all openings with wire mesh, sheet metal or concrete. Bury fencing 1- 1/2 to two feet in areas where skunks could gain access by digging. Reopen one of the entrances the next day for one hour after dark to allow any remaining skunks to exit before permanently sealing the entrance particularly in the months of May and June when baby skunks may still be in the den.

The release goes on to suggest that residents “always keep outside garbage cans tightly sealed.” That’ll be a neat trick in Evanston with our city-issued garbage carts that are full of holes. I bet you thought all those holes were gnawed by sqirrels. Maybe they’ve actually had help from the skunks.

And, unless you want to feed the skunks, the release says, don’t leave pet food outdoors.

The Evanston Police Department monitors complaints regarding wildlife. If a particular neighborhood experiences an inordinate amount of calls, the Animal Control Bureau staff shares this information with the Health and Human Services Department and other appropriate city staff.

Identified areas can then be canvassed with informational flyers sharing tips about how to control a wildlife problem. Animal Control staff can also focus their efforts in the area.

Another possible solution would be to contact the Animal Control Bureau for other methods to safely remove wildlife from residential or business properties. For further information, contact Animal Control at 847/866-5080.

Above: Skunk photo from Wikipedia, which says skunks will eat almost anything.