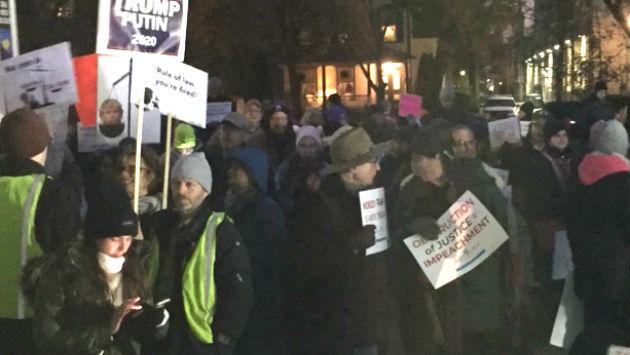 Several hundred Evanstonians in downtown Raymond Park joined with thousands of demonstrators in cities nationwide Thursday evening to protest something that hasn’t even happened yet.

Holding up signs and chanting slogans like “No one is above the law,” they issued a stern warning to President Donald Trump not to mess with the ongoing investigation by Robert Mueller.

The movement followed the resignation Wednesday of U.S. Attorney General Jeff Sessions and the interim appointment by the President of Matthew Whitaker as acting head of the Justice Department until a permanent replacement can be named and approved by the Senate.

Whitaker has been an outspoken opponent of the special investigation by Mueller of Russian interference in the U.S. Presidential election two years ago, and demonstrators feared that the new appointee might seriously hamper the investigation by either firing Mueller or depriving him of the resources to fulfill his assignment, something he has advocated numerous times in statements made on national television.

U.S. Rep. Jan Schakowsky, who was overwhelmingly reelected Tuesday to the seat in Congress that represents the Evanston area, repeated, to the cheers of demonstrators, her call for Whitaker to recuse himself from oversight of the Mueller investigation because of his outspoken statements about it.

Even the animals got into the act.