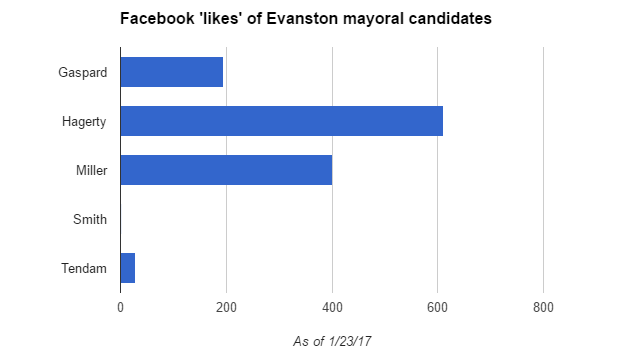 If Facebook “likes” were votes, Steve Hagerty and Brian Miller would be the likely survivors of Evanston’s Feb. 28 mayoral primary.

Of course, “likes” on a campaign Facebook page aren’t votes, but in the absense of polling in the local election — and after November who believes polls anyway — it’s one way to try to get some sense of how the candidates rank.

In the race for “likes,” Hagerty — with 49.43 percent of all of them — falls just short of the 50 percent margin of actual votes that would be needed to avoid a runoff election in April.

Miller comes in a strong second, with Gary Gaspard in third.

Mark Tendam, with just 28 likes, is in fourth place, and Jeff Smith, who only launched has campaign page within the past week or so, brings up the rear.

In another, somewhat more traditional way of measuring support — the list of supporters displayed on a campaign website — it’s no contest at the moment.

Hagerty is the only candidate listing supporters online — and has 467. Tendam does list a major endorsement — from U.S. Rep. Jan Schakowsky — but no other supporters.

The other candidates hadn’t posted lists of supporters in the mayoral race to their websites as of this morning. And Gaspard’s website is still promoting his campaign four years ago for township supervisor.

For a look at the state of campaign fundraising in the mayor’s race, see our story from last week.