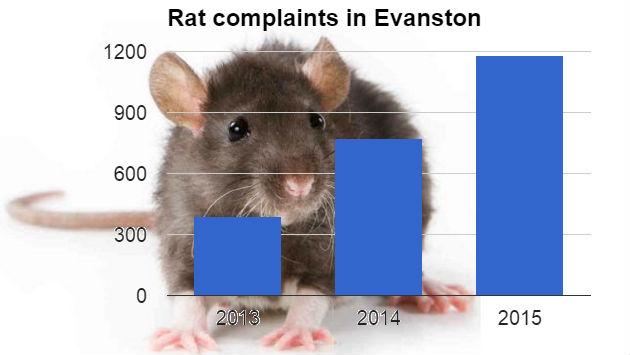 Evanston aldermen tonight will be told that despite — or perhaps because of — increased efforts to control the rat population in the city — complaints about rats have been steadily increasing over the past two years.

Assistant Health Director Carl Caneva in a report prepared for the aldermen says calls to the city's 311 service complaining about rats have grown from 390 in 2013 to 1180 this year.

That reflects, he says, the city's production of a heat map last year showing where the rat complaints were coming from and distribution of letters to residents encouraging them to call in complaints.

Caneva says the department is also producing newsletters for distribution in rat complaint hot-spot areas — with photos showing conditions in that area that provide food and shelter for the pests.

While some problems — like overflowing garbage cans — may be pretty obvious problems of neglect — others — like bird feeders that spill seed on the ground where rats can get at it — require "a more nuanced approach," he says.

Aldermen tonight are scheduled to approve a $22,880 contract renewal with Rose Pest Solutions to provide rodent control services next year.

Caneva says that in 2016 the city plans to "pre-bait" with rat poison areas that have been hot spots in the past and do overnight treatment in areas where a high volume of rats are observed.

He also plans to continue community engagement efforts with "rodent walks" for neighbors to identify problem areas and conditions.