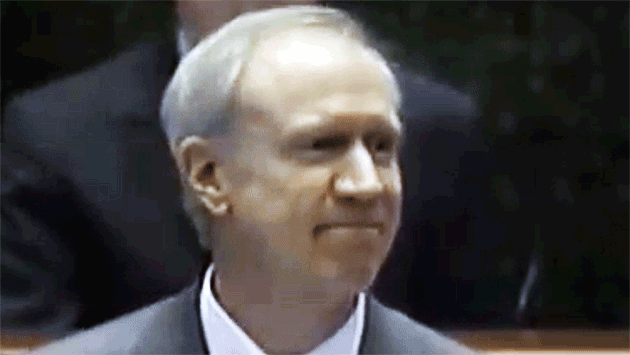 Rauner, in his budget address, said he would increase funding for elementary and secondary education as well as for early childhood education.

Rauner also says he plans to save $2.2 billion next year by freezing existing pension plans for most state workers and moving them a new plan with lower benefit levels for future years of work — a concept that is likely to draw a court challenge.

Evanston Mayor Elizabeth Tisdahl and City Manager Wally Bobkiewicz could not immediately be reached for comment on the impact of the governor’s plan on the city.

The proposed funding cut represents about 1.6 percent of the city’s total $230 million spending plan for this year.

But Biss said the Rauner plan “singles out working families and the most vulnerable among us for the deepest cuts, while asking nothing of the rich.”

“It is simply unconscionable to slash Medicaid, foster care, and much of the rest of our safety net while leaving the most fortunate among us untouched,” Biss said.

And, Biss said, “It is completely irresponsible to claim to balance a budget through pension reforms that would surely be litigated. An inevitable lawsuit will leave the state in financial limbo while the proposal meanders its way through the judicial system, and banking the savings of such a plan during that process puts us at risk of further damaging the fiscal condition of the pension systems.”

“Governor Rauner’s proposal is a tax increase. Instead of the State adjusting revenues, the Governor is forcing cities and villages to raise taxes to replace this needed revenue.

“The City of Evanston has worked hard to balance its budget in recent years and live within our means. The Governor is now asking cities to solve the budget problems of the State of Illinois which we did not create.”