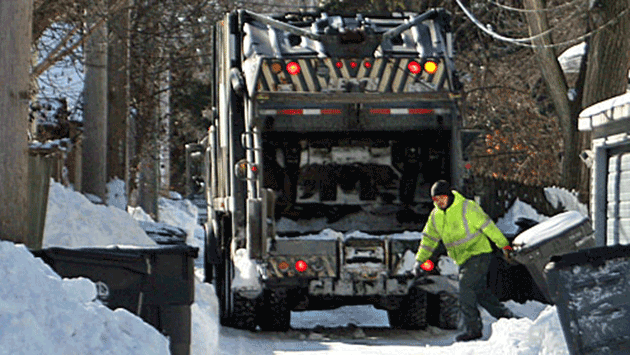 Evanston aldermen tonight are to hear staff proposals for trimming a million dollar revenue shortfall in the city's solid waste fund and pass a resolution complaining about Gov. Rauner's budget proposal that could punch a $3.75 million hole in the city's budget.

City staff is scheduled to present what are described as "options for improving the solvency" of the solid waste fund including "exploring a joint operations venture with another party and a review of alternatives from the existing waste hauler."

No further details were immediately available about the proposals.

Over the past several years the city has had to pump in a million dollars or more each year from property tax revenue to subsidize the solid waste fund.

Aldermen have been reluctant to raise sanitation fees — which appear on the city's water bills — enough to fully cover the cost of the removing trash, recycling and yard waste — even though they have boosted those fees several times in recent years.

The city now contracts out trash hauling to private firms while using nine of its own employees to make recycling pickups.

The governor's budget proposal would cut the share of state income tax revenue that municipalities receive in half. The proposed reduction would amount to about 4 percent of the city's general fund revenue, or about 1.6 percent of total city spending.

City Manager Wally Bobkiewicz says that if the shortfall were to be made up by cutting general fund workers, it would require laying off 41 people or about 6.5 percent of all general fund employees.

If property taxes were raised to cover the lost revenue, it would require an 8.4 percent increase in the city's property tax levy.

Bobkiewicz and Mayor Elizabeth Tisdahl are urging aldermen to adopt a resolution urging the state legislature to reject the governor's proposed cut.