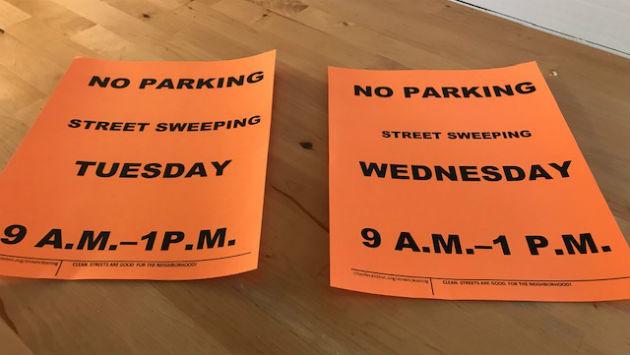 As aldermen debated Monday night how to respond to complaints that Evanston’s street cleaning signs are unreadable, Alderman Ann Rainey said she’d come up with a solution — temporary signs taped to trees by volunteers at the start of street-cleaning season.

“That’s led to total compliance,” Rainey said, “and it doesn’t take much time.”

Paper signs posted in March won’t help an unwary visitor snagged by the parking police with a $75 ticket in July, but one thing that’s notable about Rainey’s paper signs in the photo above is that they are more readable than the metal signs the city now posts on the streets.

Here’s a view of an existing street cleaning sign on Wesley Avenue north of Greenwood Street seen from two car lengths away.

Zoom in on the image and you can just begin to make out what it says, but you can probably more easily read the “No Parking Here to Corner” sign that is more than twice as far away.

The “No Parking Here to Corner” sign complies with design standards in the federal government’s Manual on Uniform Trafic Control Devices, while the city’s home-brew street cleaning sign doesn’t even come close.

And with street cleaning signs posted only twice a block, it’s highly unlikely most out-of-town visitors will be able to make sense of them unless they park their cars and then walk to the end of the block to read the sign from the sidewalk.

A separate, but similar, sign could be developed for snow emergency restrictions.

If the signs were more readable, there’d be less need to spend more money and clutter the parkways with additional copies of the hard-to-read ones.

City staff promised Monday night to come back with a revised plan for street-sweeping signs. One can only hope that they’ll address the readability issue as part of that plan.