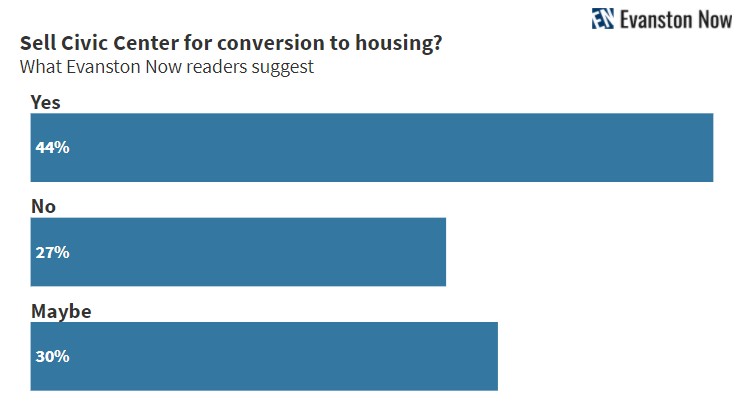 Most Evanston Now readers responding to a survey are open to the idea of selling the Civic Center and having the building converted to housing.

We polled the readers on our email newsletter list last week in a variety of issues relevant to next year’s municipal election and 475 responded to the survey.

The survey noted that the City Council has discussed selling city properties to reduce the city’s pension debt and capital maintenance costs and then asked whether the readers would support the idea of selling the Civic Center for conversion to housing.

Of those who responded, after weighting the totals to account for under-representation of Asians and Blacks among the respondents, 44% said they would support the sale, 27% said they were opposed and 30% said they might be willing to support it.

When the responses were broken out by race, Asian residents were most likely to support the sale, followed by whites and people who identified as multiracial or members of some other race. Black residents were the only group who were more likely to oppose than to favor the sale.

When the respondents were segmented by age group there were only relatively small differences — with residents in the 40-59 age group somewhat more likely to commit to the idea of a sale.

If you aren’t currently registered to receive Evanston Now newsletters, but would like to participate in future reader surveys, you can sign up here.