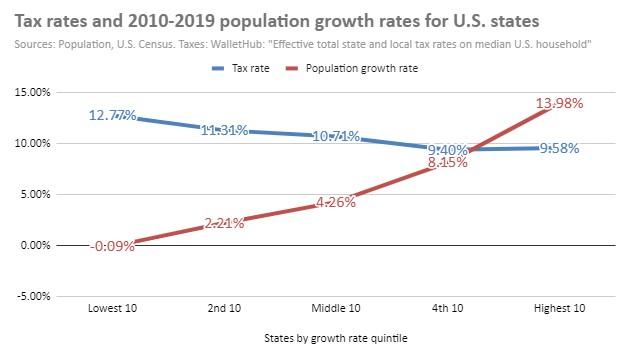 Last Friday we asked Evanston Now readers how Evanston should respond to data showing a modest decline in the city’s population over the past decade — and most readers who replied said the answer is to cut taxes to spur growth.

For example, Jay Kennedy said, “Become more fiscally responsible and STOP increasing property taxes. Stores are closing. The city is in trouble. This state is in trouble.”

Of the 16 readers who chose to respond to the question posed in Friday’s story, 10 cited high taxes as a problem that needs to be addressed.

We wanted to test the readers’ assumption that high taxes depress population growth, so we gathered data from the U.S. Census Bureau’s latest population estimates for the states and matched it with data from WalletHub that attempts to show the effective total state and local tax rate that a household with the median U.S. income would pay in each of the states.

It should be noted that there are exceptions. WalletHub says Texas and Washington state both have state and local tax rates above 12 percent but growth rates in the top quintile. And West Virginia, which has a below average tax rate of 9.66%, has had the greatest population loss of any state in the nation, 3.28%, over the past decade.

But Illinois, with the highest state and local tax rate in the nation, according to WalletHub, at 14.9%, comes right after West Virginia with a population loss of 1.24%

This year’s city budget — with significant tax increases — was approved with very little public complaint — while the 2019 budget, which called for spending cuts, brought out a wide array of people to oppose those reductions.

And the city’s two school districts, which account for roughly two-thirds of the local property tax burden, regularly hear far more calls from residents for more spending than for less.