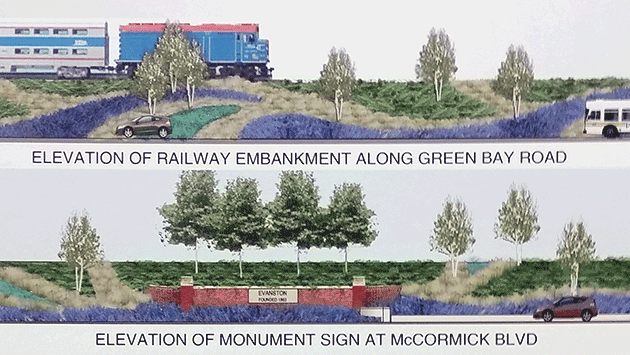 A packet with information on tonight's agenda items and additional presentations are available online.

A 3.3 – Granual materials for the utilities department $36K. Approved.

Alderman Jane Grover, 7th Ward, says it will be a nice habitat to the city's renewal of the dune habitat at the beach.

A 3.8 – Repair and repainting of north and south standpipes. $3.3 million.

Alderman Rainey complains that the local hiring aspect of this is so small as to be "a joke."

Says goals of project are to improve pedestrian safety and reduce traffic conflicts by simplifying travel patterns and lane usage, modernizing and coordinating traffic signals, and improving the appearance of the viaduct area.

Nagar says hopes to get council approval of a design approach tonight so can get state approval and get the project designed this year, with construction next year.

Alderman Grover asks about bike infrastructure. Nagar says travel lanes will be wider to accommodate bikes. Will have 13-foot wide travel lanes and will meet state standards for shared use with bikes.

Grover recommends the three-lane option — which got the most positive feedback. Holmes says she agrees, based on feedback from residents.

Rainey says why not selling to the developer who wants to build on the property — would make the city property worth more.

City attorney says can't amend the party to be negotiated with tonight, because public notice specified negotiating with National Towel.

Rainey says wants to sell the property — but wants to get the best price. Says its much more valuable to the developer than to National Towel.

Bobkiewicz recommends withdrawing the item from the agenda and will redraft the ordinance to not specify a potential purchaser.

So A 6 removed from agenda.

(Was held up by dispute last fall over CVS assistance to Little Beans at Asbury and Oakton.) Approved.

Planning and Development Committee to start at 7:15 p.m.