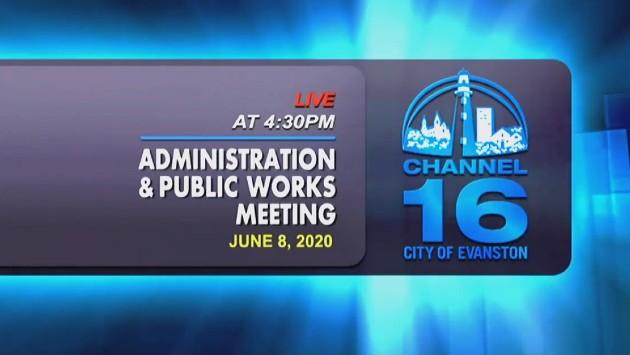 Here’s a recap of our live coverage of this afternoon’s Evanston City Council Administration and Public Works Committee meeting.

A packet with information of the agenda items is available online.

Visually, she says, most seniors get food boxes delivered on a weekly basis.

Says are seeing large number of Latino residents come through the pantry.

But do see all demographics.

Perkins says next distribution will be on Wednesday at James PArk 10:30 a.m. to noon while supplies last. Then will be distributed twice monthly through July.

Says have received over $100K in donations from community, so only city cost so far has been staff time.

A3 – Payment to ETHS for food services rev COVID-19

A4 – off consent agenda at request of Fleming

Rainey notes that cost for green alley is now lower than for traditional paving. Surprised about that.

A7 – off consent at request of Fleming

A10 – off consent at request of Fleming

A11- off at request of Alderman Tom Suffredin, 6th Ward

A12 – off at request of Suffredin

(for introduction and action tonight)

A7 – Funding for demolition of vacant, structurlally unsafe building at 2012 Maple

Gary Gerdes, says city has $75K grant that has funding available to provide this.

Fleming concerned about whether the owner can pay for the work.

Rainey says she sees no change from last time this was considered. Is going to still vote no. Can’t believe owner didn’t know the condition of the property.

Shocked that staff would propose handing out this money to people who don’t need it.

Aldemran Robin Rue Simmons, 5th Ward, says property had been in poor condition for at least 10 years — seems should have known it was a teardown.

Says staff should have let aldermen know that fund was available and now will be forfeiting money. from the grant.

Gerdes says they funds have been used in a similar way for the past five years, this is only one that’s gotten attention.

Contract for $294K with Civiltech Engineering.

Lara Biggs, city engineer, says this is a good candidate for grant funding, but need to have the enginerring report to get grant funding.

Nick Cummings, of law department, says the date chosen for extension is to match with state of emergency declaration.

Cummings says if want to extend it beyond the emergency declaration period would need to pass an ordinance.

Have to pass the extension to July 13 or the limit expires at end of day today.

Suffredin says if too broad with this may be inviting legal action form the third party delivery companies for potentially interfering with their contracts. Thinks best course is to allow it to track with the emergency order.

These third party delivery companies could say Evanston restaurants won’t get any exposure outside of Evanston.

A11- Extending state of emergency to July 13

Suffredin asks what powers the mayor would get by extending it?

Cummings says no more than what he has now under the existing state of emergency.

State state of emergency is now set to end at the end of June.

Fleming asks whether it creates issues if city is in state of emergency but the state does not.

Planning and Development Committee to start at 5:45 p.m.