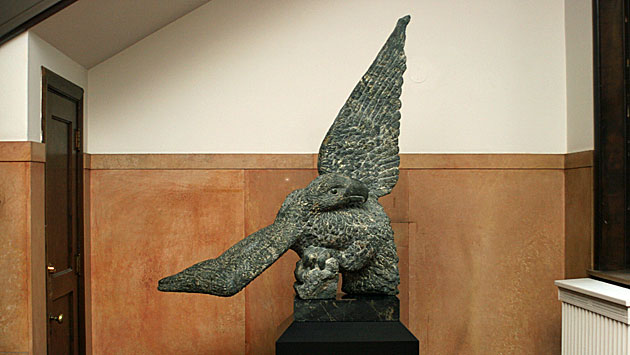 A 3.2 – Contract for $384K to L. Marshall IKnc for reoof replacement project at police-fire headquarters. Approved.

The sculpture, designed by Edward Durrell Stone and created by Koren Der Harootian, an American artist born in Armenia., was the central figure in the Eagle Room of the United States Pavilion at the Brussels World’s Fair of 1958. Acquired after the fair closed by U.S. Sen. Charles Benton of Connecticut, it's spent the last 39 years in the Evanston home of Benton's relatives who've now donated it to the city.

A 3.3 – Contract with KLF Trucking of Markham for $163K for debris hauling and disposal from the water plant. Approved.

Rainey asks why, with engineering firm designing the project, it wasn't discovered before.

D'Augustino says the engineering firm did some soundings, but didn't actually do borings of the concrete.

Parks Director Doug Gaynor says that on renovation projects you don't know what you're going to find until you start doing the work. Could rewrite the scope of work for the engineering consultant — but then that would dramatically increase what the city would have to pay the consultant.

Staff expects there'll be one more change order to cover the costs of the cleanup work.

A 6 – Approval of extension to agreement for collection coordinator contractor position. Approved.

A 7 – Amendment to parking restriciton on Lake Street

New sign would say no parking any time except Sunday and 4 to 8 p.m. Saturday.

A 8 – Amendment to secondhand junk and antique dealers regulations.

Rainey says thinks should change "wagon" to "truck." Nobody uses a "wagon."

Burrus says could be a "bus" or "van" instead.

Burrus says several junk vehicles in her ward are parked along Custer with junk overflowing, and stuff falling out. Says its more the junk being an issue. And the trucks tend to have Chicago city stickers, not Evanston's …and says there is a safety issue with stuff piled so high. Also problem with trucks parking in residential streets.

Grover says it's a healthy kind of business, doing a service that nobody else is doing. Suggests limiting the restriction to parking.

Rainey says all commercial vehicles should be banned from parking overnight. on the street.

But she says it does not address the dangerous load isuses — refrigerators and bicycles teetering over the top of their trucks.

Rainey says every person doing business in Evanston ought to have a license. And ought to obey parking restrictions.

Says there's no way to contact anybody from any of these businesses. Says people in her ward are being awakened at 4 a.m. to the sound of copper gutters being ripped off their houses.

Says painters, plumbers, all do a great job for town — all should have to abide by the law.

Be careful about being patronizing for junkers. Do a good job, but need to be regulated.

Police Chief Richard Eddington says that under the state law the vehicle has to be in motion for there to be a violation.

Says it would be helpful to have the people legitimately engaged in the business licensed so can more easily deal with problems of theft of metals.

Grover asks why it was up for introduction and adoption tonight. None of the aldermen say they know why.

Committee votes to approve the ordinance.

Public Works Director Suzette Robinson says before the solid waste franchise some businesses had negotiated "great deals' with their haulers.

Says initially anticipated that 15 percent of businesses would be in the assistance program, but turned out to be only 7 percent. The cost was $75K in the first and second years. City paid the cost difference to the contractor. In the current, third year of the contract, the individual businesses are paying one third of the difference and the contractor is picking up two thirds.

Says some businesses now have asked for an extension to the assistance program.

Asks what the aldermen want to do — add more subsidy or stick with the original plan.

Amount of money at issue is about $33K.

Alderman Rainey says she'd like to see more detail on who would benefit from the proposal.