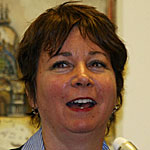 The Evanston Public Library Board of Trustees invites Evanston residents to attend a welcoming reception for the new library director, Karen Danczak Lyons, from 3 to 5 p.m. on Friday, April 20.

The reception will be held in the library's Community Meeting Room at 1703 Orrington Ave. downtown. Refreshments will be served.

Lyons began as the director on April 16 and comes to the Evanston Public Library after serving as the first deputy commissioner of the Chicago Public Library.

She began her library career in 1993. Prior to joining the CPL, she was the budget director of the City of Chicago’s office of budget and management, overseeing the city’s $3.2 billion budget.

In addition to her departmental management responsibilities, Lyons collaborated on the library’s capital improvement program and helped develop and implement the library’s strategic plans.

Over the years, Lyons has served on a number of boards and professional associations holding various roles, including: president of the board of directors of the Chicago Library System, former chairman of the Illinois Library Association’s public policy committee and former American Library Association councilor representing Illinois.

Lyons holds a master's degree in Library and Information Science from Dominican University.