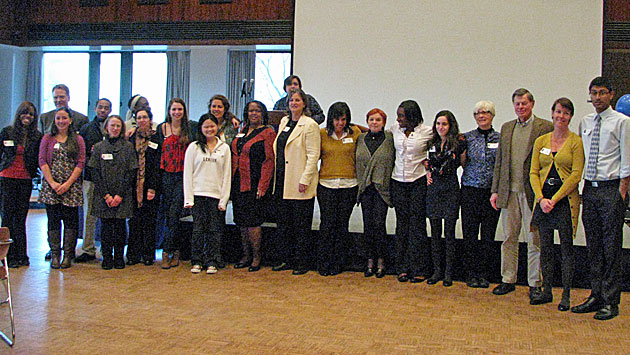 It's the seventh year for the event, which is sponsored by the university, the city, Evanston Township High School and the Evanston Community Foundation.

Guests were treated to performances by the ETHS Jazz band Handsome Salamander and NU  a capella groups The X-Factors and The Treblemakers and a keynote address by ETHS student Shamir Villeda who spoke of how volunteerism has positively affected his life as an immigrant to the United States.

The high-school-age volunteers honored were:

Hannah Cusick, who has volunteered at Evanston School Children’s Clothing Association for five years. A top student, leader, athlete, and more, Hannah has consistently taken time out of her busy schedule to help children get needed school clothes they might not otherwise have access to. She has risen to the rank of Assistant Supervisor at ESCCA, a job previously held only be adults. Hannah is a senior at St. Scholastica Academy.

Tyler Dixon, who volunteers at Youth Organizations Umbrella. Last summer she volunteered five days a week in an intensive position that involved facilitating group sessions—a position not previously facilitated by high school students. Tyler has continued to volunteer, organize, and lead within her school this year, even recruiting some of her peers from ETHS to work alongside her at YOU.

Natalie Jacobson, who volunteers with  soup kitchens in the Evanston area, planning and attending orientations, events, and more. A student at ETHS, Natalie is also a member of student groups, including Green Team, a group that seeks to make the school more environmentally friendly. She plans initiatives for Green Team, including one to eliminate Styrofoam trays in the school lunchroom.

Lynn Hyndman, a teacher at Dawes Elementary school, where she has worked tirelessly to ensure that the school garden flourishes. She spends hours tending the garden and makes sure that each student spends time learning to care for the plants. She also seen that all extra produce grown in the garden is donated to homeless shelters. Lynn has been instrumental in the campaign to put gardens in schools across Evanston, and is on the Keep Evanston Beautiful steering committee for Schools are Gardening in Evanston.

Marcia Mahoney is the director of the Evanston Public Library Friends program “The Mighty Twig,” which promotes literacy and love of learning among south Evanston residents. Marcia facilitates events, curates the collection, and organizes volunteers and donations, and more.

Julie Neely has worked with Senior Connections for more than two years, taking on the challenge of visiting a woman who was, when Julie started volunteering, going through a very rough time in her life. Julie visits weekly, and her efforts have helped the woman she works with get access to the resources that she needs and stay out of assisted living. Julie has also contributed her graphic design skills to Senior Connections, enabling them to reach out to the community more effectively.

Alex Piper volunteers at Mary Lou’s place, a domestic violence shelter operated by the YWCA Evanston/North Shore. She teaches the women living there how to buy and cook healthy food on a limited budget. She has also started a garden where the women in her classes grow vegetables, solicited donations of cooking supplies from Target, and completed an extensive domestic violence training to help her understand the women she works with better.

Ralph Starenko is a member of Interfaith Action of Evanston, where he is has served on the board since its inception in 2006. He has served many different roles, volunteering in the soup kitchen and at the warming and hospitality centers. Willing and able to step in wherever he is needed, Ralph also volunteers at St. Paul Lutheran Church, where he is a member.

Caroline Linden, who volunteers at LIFT Evanston, where she is a student director. She encourages other students and student groups to work with LIFT, and mentors the less experienced LIFT volunteers. LIFT seeks to combat poverty on a case-by-case basis, and Caroline has spent more than 700 hours with more than 200 clients to achieve this end.

Savan Patel, who is one of the community outreach chairs for Northwestern Community Development Corps. He has improved communication between NCDC volunteer sites and the University. Savan is also the vice president of programming for Phi Delta Epsilon, an international medical fraternity, organizing various volunteer opportunities for members.

La Donna Smith, a volunteer at LIFT Evanston, where she is a student director. La Donna works with members of the Evanston community, helping them with job placement, housing, public benefits, healthcare, childcare, legal assistance, and more.