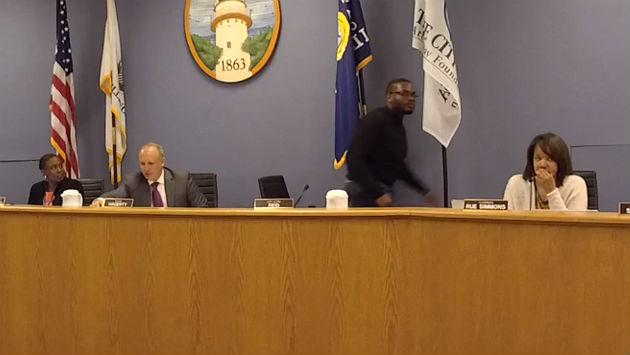 “Shame on this Council,” Evanston City Clerk Devon Reid shouted before walking out of the Council Chambers Tuesday night after aldermen voted 5-3 to designate three additional officials to share the work of handling Freedom of Information Act requests.

Reid, who recently filed suit against the city seeking more control over the FOIA process, rejected Mayor Steve Hagerty’s stated rationale for adding new FOIA officers in the police and legal departments and the city collector’s office — that FOIA requests have doubled in the past two years, making the additional help necessary.

He also apparently failed to anticipate how his decision to file suit would cost him support among aldermen, who had agreed to let him continue as the city’s only FOIA officer two years ago after a controversy arose over public release of confidential information.

As happened during the earlier controversy, Reid drew vocal backing from perhaps a score of speakers during public comment Tuesday night, some of whom waved signs and joined him in the shouts of “shame” after the vote.

Aldermen Braithwaite, Fiske, Revelle, Wilson and Wynne voted in favor of the mayor’s proposal. Aldermen Fleming, Rainey and Rue Simmons voted against it, with Rainey indicating she was voting no because she wanted to have more information on the issue before casting her vote. Alderman Suffredin was absent from the meeting.

Reid remained off the dias for the remainder of the City Council meeting, leaving it to Deputy City Manager Kimberly Richardson to call the role on the rest of the issues on which the aldermen had to vote.

The designation of a Police Department staff member as a FOIA officer may render moot one of the arguments in Reid’s suit — that as the city’s FOIA officer he’s entitled to receive copies of all police body camera videos released in response to FOIA requests.

Under state law the City Council is free to choose whoever it wants to handle FOIA requests.

Update 6:45 p.m .: In an interview this afternoon, Reid said he considered his walkout a form of civil disobedience.

He also claimed that the mayor had violated section 18.11 of the City Council Rules, by placing the FOIA item on the agenda as a special order of business for Tuesday’s meeting.

Reid contends that the provision means the aldermen would have to vote at one meeting to designate an item as a special order of business for a subsequent meeting, before action could be taken on the item.