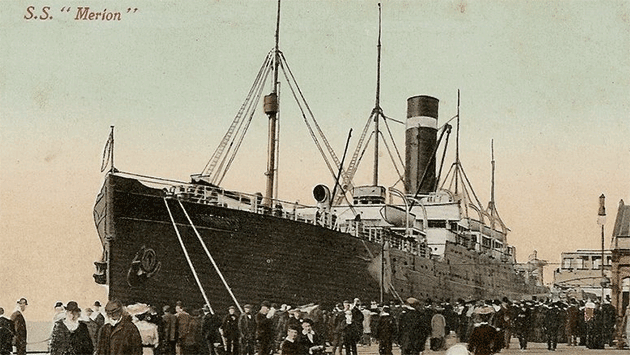 The new owners of Evanston's North Shore Hotel have come up with a new name for the building that's now undergoing a substantial rehab project.

Jeff Michael, of Horizon Realty Group, says the hotel had a special meaning for his family even before they bought the building in Sept. 2012, because his parents, Danny and Martha, had been married in the hotel's ballroom in 1966.

After initially renaming the building the North Shore Residence, Jeff Michael says, they'd been working with branding companies to come up with a new name and had settled on the Crystal Residence — a concept picked up from the elaborate crystal chandeliers in the hotel ballroom.

But then Danny Michael discovered, in doing some research for a family genealogy project, that his grandfather had immigrated to America on the S.S. Merion, an American Line ship.

Another image of the S.S. Merion.

The passenger list shows Abraham Michael, a farm laborer born in Persia, travelled from Liverpool, England to Philadelphia on the Merion, arriving on Oct. 3, 1911, with plans to continue on from there to Chicago.

"Crystal was a pretty name," Jeff Michael says, "but it didn't have a tie to us. 'The Merion' wraps it in a pretty bow for us."

He added that given the number of immigrants to the Chicago area who may have sailed on an American Line ship, he anticipates that many potential residents of the retirement hotel may have some family tie to it as well.

He plans to have a six foot model of the S.S. Merion built and installed in the building's library and is collecting other artifacts from the ship.

"It's surprising what you can find on eBay — postcards and dinner menus — all kinds of stuff," Jeff Michael said.

He says the multi-million dollar rehab project in the existing building is progressing well and should be done around June 1.

"There's been some disruption as you'd imagine, but the contractor has been working closely with the residents to make the transition as easy as possible."

He said the worst of the interior work is now completed, an while the outside of the building hasn't seen any changes yet because of the weather, he's planning to redo the canopies and retail storefronts.

As for the S.S. Merion, which first sailed in 1902, it remained in passenger service until after the outbreak of World War I. Then it was taken over by the British Navy, which outfitted it as a decoy ship to resemble a naval warship.

In 1915, a German submarine passed up shots at several troop carriers in a convoy for the chance to torpedo what it thought was a warship. The Merion sank, but without any reported loss of life.