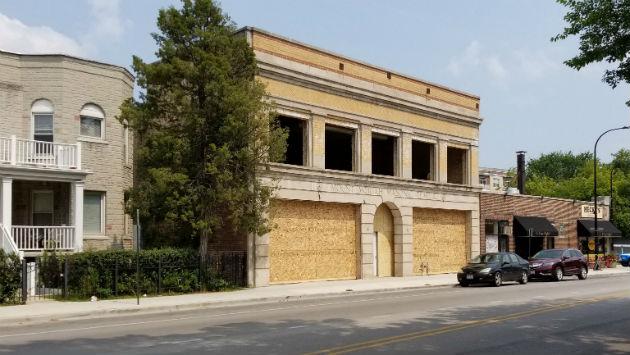 Owner Dwayne MacEwen, principal at DMAC Architecture in Evanston, says he plans to turn the building into a new office for his architecture firm and also a co-working space.

MacEwen, who bought the building in 2015, says getting started on the renovation work was delayed while he worked on major projects for other clients.

He says he wants to something very ambitious at the back of the building, which faces Green Bay Road and give it “another front door experience” from what’s now a very plain looking facade.

The back of the Masonic Temple building as seen in a 2017 Google Maps image.

MacEwen says he hopes to have the renovation work completed by October or November.

The building has “great bones” with fine wood floors and all the original artifacts in the upstairs temple space, MacEwen says. Those artifacts are being stored for now and some, like chandeliers, may be repurposed in new conference rooms while others may be donated back to the community.

The two-story, 8,400 square foot building, constructed in 1929, was designed by Walter Thomas Bailey (1882 – 1941), an African-American architect from Kewaunee, Illinois. Bailey, known for building theaters and Masonic Temples, was the first African-American graduate with a bachelor of science degree in architectural engineering from the University of Illinois at Urbana-Champaign.

The building has been used in recent years as the offices for CEDA Neighbors at Work as well as the Evanston branch of the NAACP.

Public records indicate that MacEwen paid $350,000 for the building and a 2,500 square foot parking lot behind it.

The property had been on the market since late 2012.