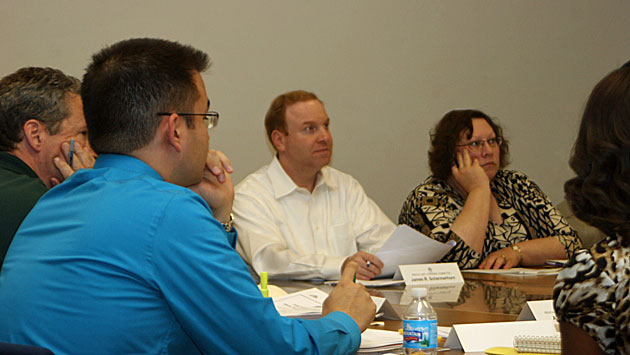 A special committee appointed to review a proposed rental licensing ordinance voted 4-3 Thursday night to send a revised draft back to the Evanston City Council.

The proposal, originally developed by city staff, would replace existing city rules that require landlords to register their properties with a new scheme that would require a unit to be licensed before it could be rented.

It would establish penalties for renting an unlicensed unit that could reach as high as $2,500 a day.

And it creates a process for revoking licenses for building code and other violations after a hearing by the city manager.

As with other administrative decisions, the manager's decision to revoke a license would be appealable to circuit court.

Rental licenses would have to be renewed every year.

Although Community and Economic Development Director Steve Griffin said the city currently knows of about 40 properites that have serious code violations, the ordinance would impose a license fee of $26 on each of the nearly 14,000 rental units in town, except for those in owner-occupied two-unit buildings, which would be exempt from the licensing scheme.

It became apparent during Thursday's meeting that the ordinance would have little if any impact on a major complaint of residents living near Northwestern University — loud parties at buildings rented by students.

Because of protections in state law against arbitrary evictions, Ken Cox, an assistant city attorney, said, a landlord must go through a lengthy court process to win an eviction.

And while the city might be able to use the licensing law to goad a landlord into filing an eviction case, it would not have grounds for revoking a licenses as long as the landlord was pursuing the eviction in court.

While the license fees might raise $250,000 or more in new city revenue, Griffin said, the city still wouldn't be able to inspect most rental units frequently.

The committee amended an ordinance provision that would  have required an inspection once every four years to instead only permit inspections that often.