No one showed up to object Wednesday night when the Evanston Plan Commission reviewed a 232-unit mixed-use rental apartment project proposed for the southeast corner of Chicago Avenue and Kedzie Street.

A model of the proposed development looking southeast from Chicago and Kedzie.

City officials said the project meets all requirements of the C1a zoning for the site and only was before the commission because it exceeds size thresholds that automatically trigger planned development review.

In contrast to other recent projects that have drawn a parade of complaining neighbors to commission hearings, a year of consultation with neighbors by developer Evanston Devco, LLC, led to a scaled down project plan, reducing the apartment count by 55 units, that seems to have defused opposition.

The two-building project includes 8,400 square feet of ground floor retail space in the north building facing Chicago Avenue and 20 street-level live/work units split between the Kedzie side of the north building and the Chicago frontage of the south building. 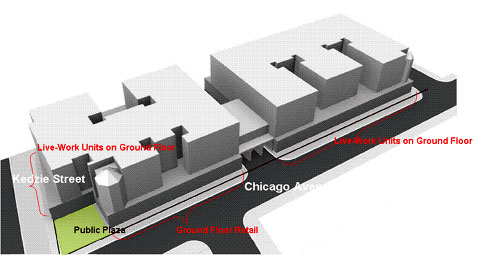 "There will be no hole in the ground here," Ross said, referring to condo developments stalled by the slowing real estate market. "We seek no outside financing and intend to build the project and own and operate it for the long term."

Ross said the site, now occupied by an auto dealership and some partly vacant single-story retail buildings, generates about $150,000 in real estate taxes a year for the city. He said tax revenue from the proposed development should total about $1 million annually.

That, Ross said, should more than make up for the loss of sales tax revenue from the auto dealership, which has already announced plans to move to Skokie early next year.

Linda Goodman, a real estate market consultant hired by the developer, said she believes the project will be very attractive to young professionals because of its proximity to the CTA and Metra rail lines and to shopping, both at Main Street and Chicago Avenue and in downtown Evanston.

"It will be ideal for two-person households with one working in Evanston and the other in downtown Chicago — both can easily get to work," Goodman said.

She said that between 200 and 250 condos in downtown Evanston developments are now being rented and she doesn’t expect that to increase because of restrictions on the number of rentals in those buildings.

While the market is in a trough now, Goodman said, she expects it to rebound by mid-2010, when the AMLI project would reach the market, which should reduce the competition the new development would face from rental condos.

Plan Commission members asked for more detailed renderings of the facade of the buildings and postponed a vote until their Sept. 10 meeting, in part to wait for a report on the development from the city’s Public Works Department, which may answer questions they raised about traffic patterns around the site.

The project received support from Evanston Chamber of Commerce President Jim Marsh, who said the chamber believes the project would bring new customers to existing businesses in the neighborhood.

He added that he has a live/work space for his own business and believes more such spaces for entrepreneurs would be a great asset to the community.