Workers swarmed over the Sienna condo complex construction site at 1218 Oak Ave. today trying to determine how best to shore up the building after a portion of the parking garage collapsed over the weekend. 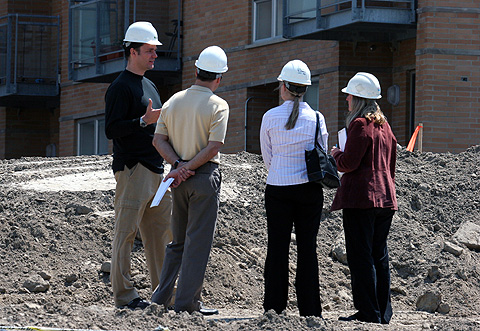 Workers confer while standing at the edge of the garage wall in front of a mound of dirt being used to create a "green roof" for the garage when part of the roof collapsed Friday night.

Evanston Community Development Director James Wolinski says it could take until early next week to secure the condo building walls adjacent to the part of the garage that collapsed so that residents of the 55 occupied units in the building can move back into their homes.

He said when the 20-foot by 70-foot section of the garage roof collapsed, it left a pile of dirt seven or eight feet deep at the bottom of the garage — three floors down.

He said it may take several more weeks to shore up the garage itself and to get all the cars out.

Five cars on the lowest level can't be moved at all because of the debris, Mr. Wolinski said.

He said plans for the garage called for six feet of soil to be put on the roof to create a landscaped terrace for the condo units.

"It was supposed to have been engineered to handle that load," Mr. Wolinski said, adding that it will likely take many weeks to definitely determine what caused the collapse. 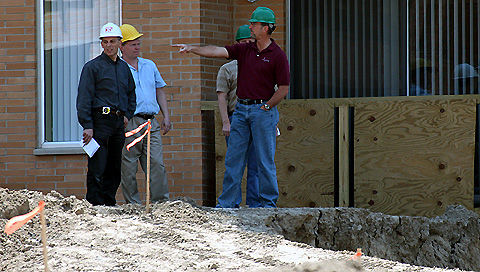 Workers stand on a walkway just outside a condo unit, near the edge of the collapsed section of the garage roof.